Gordon Bicker
Gordon guarantees to create articles for you which are unique, interesting, and memorable. He is currently studying Games Design and Production BA (Hons) at university along with writing here and also writing for Attack of the Fanboy. He is a massive fan of The Elder Scrolls Series and has also been playing Skyrim since its release year and it is his favorite game of all time.

I have played The Elder Scrolls franchise for over and around 14 years. Over time I have seen the series transform throughout its iterations. Personally, it’s my all-time favorite game franchise, so I enjoy delving into every aspect of the lore that the world offers. Shadowmere has consistently been my horse of choice for riding around the lands whenever I get the chance to acquire them.

If you also want to share that sentiment with me and bring the trusty steed into your life and learn everything about them, look no further than this article!

Key Details of Shadowmere Up Front

Shadowmere is generally associated with The Dark Brotherhood and is known to have lived for over 200 years. Extremely interesting! She is also one of the unique horses in the series. Coated in a sheen of glistening black that enraptures the glowing red eyes, Shadowmere certainly knows how to make an entrance.

Lucien Lachance once owned the horse in The Elder Scrolls IV: Oblivion before giving the horse to the player during the experience. The horse also has immense health regeneration power and capability, making it one of the best horses to have while riding through the lands.

Within Skyrim, Astrid of the Dark Brotherhood instead owns the horse. Shadowmere has gained immense fame over the years, and this is only sure to continue with the franchise.

As aforenoted, Shadowmere links to The Dark Brotherhood, and to get the horse in the main series installments of the franchise, you will be completing quests with the Brotherhood. Shadowmere is a mount that you can take around the world. Different, of course, for The Elder Scrolls: Legends which is the trading card game but still, Shadowmere is a valuable asset.

In terms of the lore of the horse, Shadowmere is an undead horse that has ‘lived’ for countless years, as previously mentioned. Thought to be a female horse by many, although there is no clear answer on what gender Shadowmere is. Over the games, Shadowmere has been referred to as Female sometimes, then Male other times, a bit all over the place for trying to get the answer!

The horse has a Dark Brotherhood Saddle that makes sense due to its previous owners of Lucien Lachance, firstly in Oblivion, then by Astrid in Skyrim. Both of whom are members of The Dark Brotherhood. After getting the horse, Shadowmere’s history now intertwines with your own, so it’s time to venture forth into the lands that call you and make your mark on the world with Shadowmere.

Key Moments and Features of Shadowmere 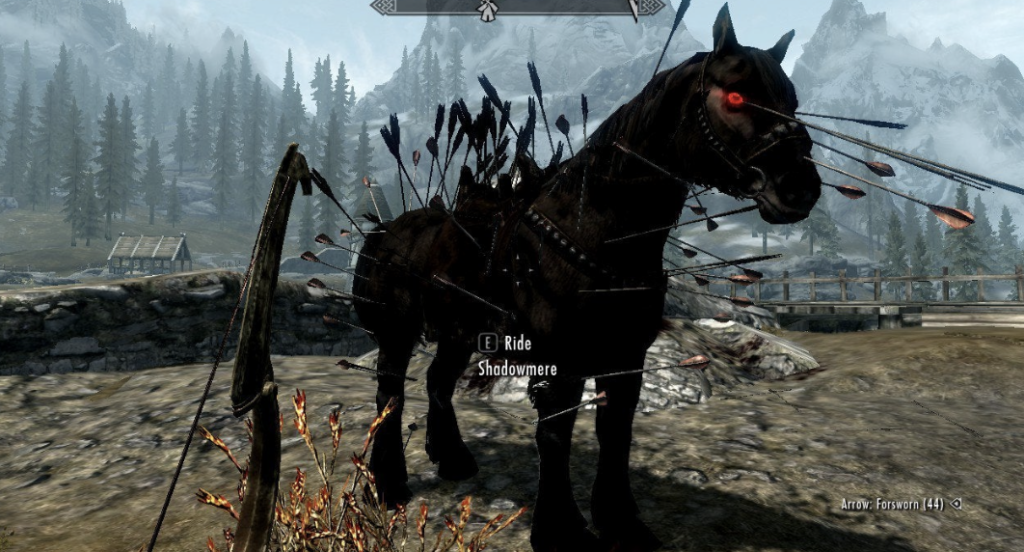 The fan-favorite moments with Shadowmere have always been for the horse’s first entrances into the world. Shadowmere has spawned out of a pool of liquid and out of the ground. These entrances are always memorable for players, and even now, I recall the first time years ago I met Shadowmere. I still have Shadowmere as my favorite horse within Skyrim.

Within The Elder Scrolls IV: Oblivion, Shadowmere is marked as essential. The player will always be able to keep Shadowmere alive and kicking. However, within Skyrim, Shadowmere does not have this mark. Shadowmere can fall. Nonetheless, they will respawn ten days after to locate at the pool near the Falkreath Sanctuary where they first spawned.

Within Oblivion, players had conducted particular devious methods to utilize the ‘feature’ that Shadowmere had no encumbrance values. In turn, players had effectively knocked out Shadowmere themselves to place items into the horse. Whenever they wanted to grab those items again, they would knock out poor Shadowmere again and then acquire them again.

Of course, given there was no encumbrance, it would mean that players could effectively place an infinite number of items into Shadowmere for whatever reason they needed.

I will always recall the first time I got Shadowmere in Oblivion. The excitement I felt! You will also be sure to have this if you enjoy getting unique horses and just horses in general within games. I started by riding Shadowmere around the woods after acquiring them and seeing my horse contrast the entire background. It was a sight to behold and a brilliant memory forged!

Related Quests and How To Get Shadowmere

Due to Shadowmere’s appearances in three games, there are three main ways to acquire Shadowmere!

Getting Shadowmere in Oblivion will involve you completing The Dark Brotherhood quest named The Purification. For the objectives, you will be reading a letter written to you by Lucien Lachance. After that, you can meet them in Fort Farragut. When you do that, you will have another task to complete.

The objective contains spoilers; I’ll avoid saying them for you! After completing the objective, you will be able to chat with Lucien again, and after you do that, Shadowmere will be yours to roam around the world together! Congratulations, you have a new mythical horse!

As for Skyrim, to get Shadowmere, you will have to progress through the quest line of The Dark Brotherhood again. The quest you will need to complete this time is named The Cure for Madness. Again there are heavy spoilers related to this quest. Once you complete it, however, you will get Shadowmere.

There has been a glitch documented with trying to get Shadowmere in Skyrim, one such glitch being that if players have a horse active when getting Shadowmere, the new horse sometimes doesn’t appear correctly. So make sure that you have no horse active before the quest to be extra sure Shadowmere will appear correctly. However, this glitch is likely very rare, so there shouldn’t need to be too much worry for you before starting the quest.

I have had no issues when getting Shadowmere in either game, so you can rest assured that acquiring them won’t bring up these issues in likelihood. Now’s the time to start riding around the lands like the dashing midnight streak of crimson red that you will be with Shadowmere. 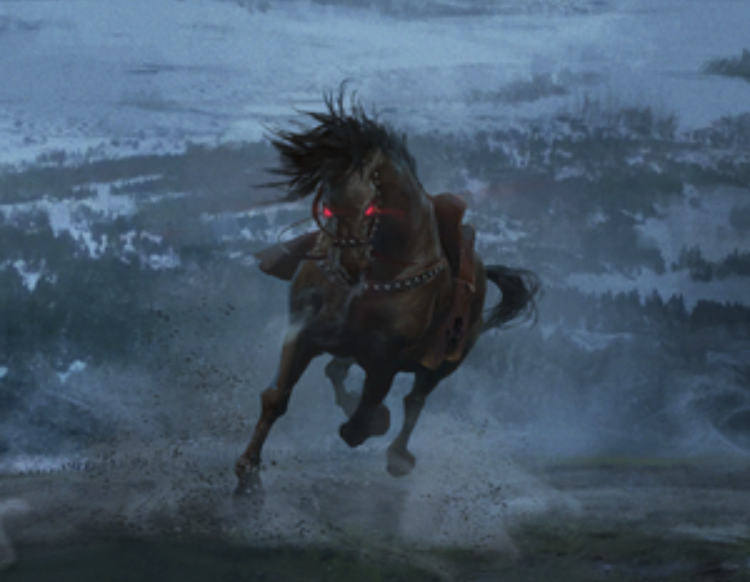 Legends is the trading card game for The Elder Scrolls that many people enjoy playing through! Shadowmere is a legendary ‘neutral creature’ card. There are different story sets, and you will be able to earn this card from the Dark Brotherhood story set.

In terms of what the card does, the official information on the abilities and attacks for the card is “Charge” and “Last Grasp: Shuffle Shadowmere into your deck, give it +3/+3 and increase its cost by 3.” Now’s the time to start working towards getting the chance to get the Shadowmere card.

The Dark Brotherhood story set is called The Fall of the Dark Brotherhood. Within the story, there are six episodes for you to play through. These are: Enter the Shadows, The Corsair Conspiracy, The High Priest, A Traitor in our Midst, The Missing Assassins, and then Revelations. There are over a whopping 50 cards in the set.

The entire story set can also be purchased for around $19.99 at its release or was 3000 in-game gold currency.

With Shadowmere’s appearance across the three games, the stats vary for their health and other information. If you want to learn more about the under-the-hood information for Shadowmere, this is the place for you! Oblivion has Shadowmere marked essential. Shadowmere cannot die because of this. The following are the stats of Shadowmere in Oblivion:

For Skyrim, Shadowmere is not essential but has a massive increase in health. These are the stats:

Shadowmere’s health regeneration is a massive advantage to have for battles. There is an excellent times multiplier of regeneration Shadowmere will have high health throughout the ensuing chaos of whatever conflict.

As for The Elder Scrolls: Legends, Shadowmere has:

There are certainly a lot of varying stats for Shadowmere in the series!

Question: Can I get Shadowmere earlier in Skyrim and Oblivion?

Answer: Technically! You can spawn Shadowmere by utilizing the console commands with the usual method, including the Base Id for Oblivion as noted above or the Reference ID for Skyrim.

Question: Is Shadowmere going to be in The Elder Scrolls VI?

Answer: It is unknown whether Shadowmere will make a return to the next installment of the franchise. But with it always being included in the mainline games after Oblivion, I would say that it is a possibility!

Question: Can I change the saddle for Shadowmere?

Answer: Unfortunately, this is not possible to do for Shadowmere.

Question: Does Lucien Lachance ever meet Shadowmere again in Skyrim?

Answer: Yes, in spectral form, Lucien has been seen to greet his once trusty steed from his past, which is a nice thing to observe. When players summon Lachance as the Spectral Assassin, this is when this interaction will happen.

Question: Can I jump with Shadowmere?

Answer: Yes! You absolutely can. If you want to jump around the land with Shadowmere, you can do that as much as you would like with the horses. Only for Oblivion and Skyrim as, unfortunately, you won’t be able to jump with a trading card yet.

Shadowmere has captured the hearts of many Elder Scrolls fans. For their appearance and companionship throughout the series. They will always have your back, and it is a thrill to get Shadowmere in every game they are within. Of course, completing The Dark Brotherhood quests is something that every player tends to do as quickly as possible due to their enjoyment of the questlines.

Ride across the gorgeous landscapes with Shadowmere and give your enemies something to remember as you ride valiantly into the heat of battle with your trusty steed.