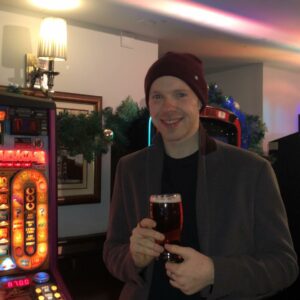 James Gibson
James Gibson is a writer for Venture 4th Media specializing in the fast-moving, ever-evolving, gaming market. James has been writing content within the gaming sector for many years, alongside myriad scriptwriting and reviewer roles all whilst being fully immersed in said sector. He also believes that articles related to gaming should be at all times, simultaneously light-hearted and informative. James has a passion for RPGs in particular and can often be found playing these games rather than writing about them.

One of the best things about any RPG like Skyrim is the relationships we make along the way. Like many other Bethesda titles, Skyrim places great emphasis on dialogue and the relationships between characters, slowly building trust between the player and those they interact with.

Eventually, some of these NPCs become something like friends to the player, key staples to your video game life that you cannot picture Skyrim without.

This relationship is only bolstered when you add in the possibility of having said friend or ally as a companion or follower along all of your various journeys and life-altering quests.

While Skyrim has a very ignite number of scripted and fully fledged companions, the ones that they did include are incredibly well fleshed out, with their own lives and personalities; they are not simple cookie-cutter repetitions of one another who stand around to carry your belongings.

As they have unique personalities, many of the possible followers in Skyrim are either loved or hated by the community at large, resulting in some followers being used by every player during one playthrough or another and others being left out in the cold with the Adoring Fan from Oblivion and the many other TES NPCs that we would rather forget about.

Therefore, with all this being said, why don’t we take a look at one of the most popular followers in all of Skyrim, Serana?

If that sounds good to you, maybe you should stick around to find out a little more about Serana’s backstory, her role in the Dawngaurd DLC, and how she functions as a follower of the Dragonborn. Let’s go!

Many, Many Years Ago

According to the lore, their family dynamic was normal for a time, with both father and mother adoring their daughter and ruling over their vampiric estate with impunity. Harkon would spend his time on matters of state, while Valerica would spend most of her time conducting experiments in her own wing of the castle.

However, it was not long until the differences in her parent’s personalities would drive the two apart, causing a rift in the household and for both of them to begin keeping secrets from one another. It seems that it was at this point that Valerica began observing Harkon and his plans, constantly watching to remain one step ahead of him to protect herself and Serana.

It would seem that Valerica was a very smart woman because, not long after this, Lord Harkon discovered a prophecy in one of his many books. This prophecy called the Tyranny of the Sun, details how and why vampires are weaker in the sunlight, something that has plagued the vampiric race ever since its creation.

Therefore, Lord Harkon decided to follow this prophecy down the rabbit hole until he discovered a way to lift the sun’s tyranny over his people.

In the end, the requirements were rather simple, if not hard to obtain. Firstly, he would need to gather three specific Elder Scrolls, the rarest and most valuable things in the entire world. Then he would need Auriel’s Bow and the life of his only daughter as a sacrifice.

Not On My Watch

As you might imagine, Valerica had one or two problems with Harkon’s plan. First of all, and most obviously, she was not about to let her daughter be sacrificed for anything, even for the sake of the entire vampire population of Nirn.

Secondly, she also felt that the outside world was not the domain of vampires and that if her people tried to infiltrate society at large, using the absence of the sun to their advantage, the people of Nirn would eventually revolt, causing them to hunt down and kill all vampires with impunity.

Therefore, she had no other choice but to work against her husband, ensuring that there could be no way for him to bring this prophecy to life. Firstly, she went to work by collecting two of the three Elder Scrolls that her husband would need; she split these up, taking one for herself and giving the other to Serana.

Next, she decided that to ensure Serana’s life would not be sacrificed in vain; she would have to be hidden away for as long as was needed. Therefore, with the second Elder Scroll strapped to her person, she locked her daughter away in a stone sarcophagus underneath Dimhollow Crypt. Shortly after this, she escaped into the Soul Cairn with the other scroll, ensuring that Harkon could never complete the prophecy or harm her daughter.

Serana is an integral part of many of the quests in the Dawngaurd DLC. However, depending on whose side you fall on during the opening stages of the Dawngaurd quests, she may disappear from the player’s side for a short time. With this in mind, here are the quests that you will need Serana by your side to complete.

While Serana remains a vampire, she has the ability to take Elven arrows from the player and dip their tips in her blood, creating Bloodcursed Elven Arrows. With these arrows and Auriel’s Bow, the player can fire a shot at the sun, resulting in the sun being shrouded in darkness, removing the debuffs which come with sunlight for vampires.

This is a very useful skill of hers that will only become possible after the completion of the Touching Sky quest.

As you and Serana become great friends throughout the Dawngaurd DLC, it is not out of the question that the player may wish to change their mind, becoming a vampire further down the line.

If you do make this decision, the player can ask Serana to turn them into a vampire at any time. She will ask if you’re sure before proceeding with the deed, turning the player into a Vampire Lord.

Suppose you have an issue with Serana constantly complaining about the sunlight whenever you step outside. In that case, you might want to encourage her to turn back into a human, letting go of her immortality for a petty human life where she will undoubtedly die within the next five years from some sort of horrid medieval-style disease.

To do this, the player must simply speak to Serana after completing the Dawngaurd DLC; this will allow the player to access a new dialogue option wherein you ask Serana if she has ever considered seeking the cure for her condition.

When you ask her, she will say no and ask the player why they brought up the matter. This will give the player three different options to explain why you think she should take the cure.

It is important which option the player chooses, if you choose wrong and offend her, the option will disappear forever, and she will not take the cure. Therefore, make sure to choose the option: “Look what it did to your family.”

If you follow this up with a message of support, stating that “if you want to cure yourself, I’ll support you,” Serana will say that she needs to go away for a while and that she will meet you back home when she is done. After you complete this set of dialogue, she will eventually leave you for a couple of days. The player can either continue playing the game or use the wait menu.

When she returns, the player will immediately see a difference in Serana. First of all, her eyes will have changed; while they are the same weird color, they no longer glow in that evil vampire style. She will also speak about how she feels so alive and able to breathe properly for the first time in her life.

Serana’s combat style will also change quite a bit due to her turning human. This includes:

Unlike many followers of her caliber in the game, Serana does not come equipped with any rare or exclusive items that will have the player foaming at the mouth. Instead, you can expect Serana to wear a typical set of Vampire Royal Armor as default.

While enchanted with a +125% Magicka Regen enchantment, this set is pretty poor compared to other light armor in the game, especially in terms of Base Armor stats (30).

Serana also caps at level 50. Therefore, a lot of her main stats reach pretty high levels, especially sneak, which tops out at 100. However, due to her aggressive combat AI, she will never actually attempt to sneak, blowing the player’s cover at every opportunity and rushing into the fight whenever she can.

Primarily, Serana plays as a necromancer in combat, frequently using reanimation spells as well as Vampiric Drain. Offensively, she will also use a Lightning Bolt and Ice Spike spell when needed. Serana will rarely use a sword or any other kind of weapon/shield for that matter; however, she will use a staff if given one.

Can You Marry Serana?

As this is one of the main questions everyone asks regarding Serana, I thought it was only right to include a small section on it at the end of this guide.

So, to cut a long story short, the simple answer is no. However, as Skyrim is a game with many dedicated fans, it was not long until some lonely soul out there decided to dedicate too much of their time to create a marriable Serana mod for Skyrim.

If you want to check out this mod, click here.

Question: Can you Marry Serana in Skyrim?

Answer: Serana is one of the many unmarriable characters in Skyrim. However, should you really want to marry the daughter of Coldharbour, check out the marriable Serana mod on the Skyrim Nexus.

Question: Can Serana Still be Your Follower If you Choose Dawngaurd?

Answer: If the player decides to stick with the Dawngaurd during the DLC, Serana will eventually come to fort Dawngaurd and ask for your help, telling the player about the prophecy and how you should team up to stop her father. From this point on, you will always be able to have Serana as a follower.

Question: Can you Turn Serana Into a Human?

Answer: If the player waits until after the Dawngaurd DLC is completed and asks Serana whether she wants to cure her vampirism, the player can convince her. She will simply disappear for a few days and return as a cured human woman.

So, there you have it, a guide to one of the most popular followers in the entire Isle of Skyrim. Serana is definitely the follower you want with you when you get into a little scrape. Not only is she good in a fight, but she is quick-witted and always ready for a scrap with some fellow undead creatures.
For me, Serana was a demonstration of everything the Skyrim developers learned about their AI system over the year post-Skyrim’s launch, giving them the opportunity to display their improvements through Serana. I love how she will get on with her own task while the player stands around doing nothing.

With all this in mind, I really do hope you enjoyed this guide on Serana and found it interesting. I wish you good luck in your journeys across Skyrim and beyond. Bye!