The Thalmor Embassy is one of the more contentious buildings for the people of Skyrim. Many see its presence in the province as an insulting invasion by the Aldmeri Dominion. Still, it also caters to some of the wealthiest and most influential individuals in Skyrim as well.

The embassy is also one of the more well-known locations in the game since players have to journey there for the main questline, but there is still a lot to know about it, especially if you are a new player. 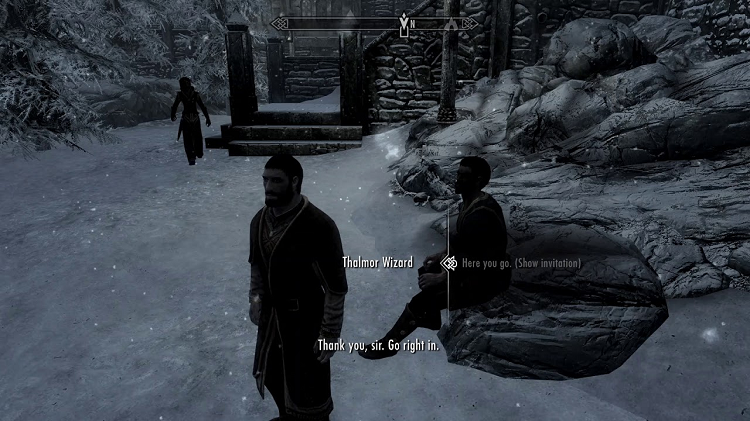 The embassy’s contentious nature is direct because of its ties to the Aldmeri Dominion, so it is essential to understand that conflict. The Aldmeri Dominion rose to power following the Oblivion Crisis that was the subject of the main questline in Oblivion.

The Empire’s poor response to Mehrunes Dagon’s attack on Nirn outside of Cyrodiil led many of the provinces under its control to fall into open revolt. In the west of Tamriel, this led to the Thalmore founding the Admeri Dominion with the other elves and launching a total war against the Empire for their freedom.

The war went on for a long time but was ultimately a disaster for the already weakened Empire. The war went so terribly that even the seat of the Empire, the Imperial City, was captured and ransacked by the Dominion. The Empire eventually rallied enough soldiers to retake the city, which led to a treaty being signed between the two known as the White-Gold Concordat.

The Concordat heavily favored the Dominion, freeing their provinces from the Empire’s control, outlawing the worship of Talos, forcing the Empire to disband the elite solider unit known as the Blades, and establishing embassies for the Dominion throughout the Empire to keep an eye on things.

The White-Gold Concordat was a hard pill for all of the Empire to swallow. Still, it was particularly so for Skyrim, as Talos is their primary deity since he was initially a Nord who found the Empire himself before ascending to godhood. This sparked the civil war between the Empire and Stormcloaks in Skyrim, responsible for the game’s iconic opening.

This makes the Thalmor Embassy north of Solitude seem like a monument to the province’s abandonment from the Empire to most residents of Skyrim, which is not helped by the Thalmor becoming involved in nearly every aspect of the province’s politics to boot.

The building can be divided into four sections: front courtyard, back courtyard, embassy, and dungeon.

The Front Courtyard is the smallest, with a small gated area and a barracks in one place; however, you need a key to get into the guard barracks. The size tends to be guarded by two Thalmor guards and a powerful Thalmor wizard to dissuade any from attempting to break in.

The embassy’s main building is primarily used for hosting parties and entertaining guests or political meetings. This means that there is not much to find in the establishment or its connected kitchen.

While you are here, though, there is a ton of food in the kitchen and the main room that can be looted either for refilling your hunter in survival or to heal up during battles. The kitchen also holds many valuable alchemy supplies such as Dried Elves Ear, Orange Dartwing, Rock Warbler Egg, and Fly Amanita, to name just a few.

By going through the kitchen’s storeroom, you can also make your way into the back section of the building that holds a rest area for Thalmor guards as well as some supply closets and dormitories. These rooms do not have very spectacular loot, but there are a lot of low-level and basic supplies that you can gather from them.

This includes potions, Septims, poisons, and some food and ingredients, although you’ll have to either deal with or avoid the guards that repeatedly walk patrol routes throughout the area.

The rear courtyard is also pretty small and constantly patrolled by one Thalmor guard and two Thalmor wizards. However, it does have lavender, thistle, and blue mountain flowers to pick and the entrance to a larger interior area known as Elenwen’s Solar. Atop the Solar leveled potions spawn that you can grab with a telekinesis spell from the ground below.

The Solar itself is simple to get into and is primarily used as office space. Because of the prestigious nature of the Thalmor Embassy, there are many potions, jewelry, and leveled equipment to loot throughout the Solar. Still, some various dignitaries and guards wander around who can detect you.

In the northwestern corner of the Solar is an office with a locked chest for the Diplomatic Immunity quest and a key to get into the dungeons below. The remainder of the offices holds other middling loot like bags of Septims, leveled potions, and a mix of food and ingredients.

The ground floor of the Solar then has a door with a Master difficulty lock that can be unlocked with the key from the chest to get into the Thalmor Embassy’s dungeons. 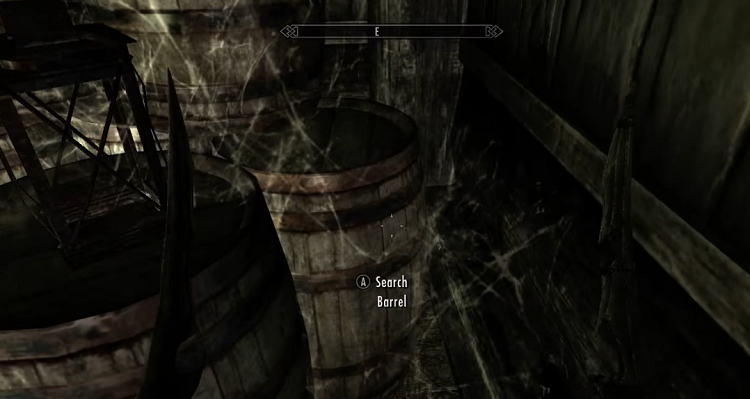 The embassy’s dungeon is split into two levels, and you can see the lower from, the higher. You will see a Thalmor guard and wizard interrogating a man when you first enter. You can deal with these two however you wish, and next to the table where the wizard sits is the unique book Thalmor Dossier: Esbern, which gives some excellent background information on the character.

The dungeon has more of the loot that you’ve been finding throughout the embassy, as well as a trapdoor that leads to a small dungeon known as Reeking Cave. To open the trap door, you need to kill two guards who will find you in the room with the key on them.

The Reeking Cave itself houses a frost troll that you will have to deal with to make your way out. Luckily, any of the prisoners that you free during the quest that is trying to escape with you will immediately attack the frost troll to help, but that does mean that getting any of them to survive takes quick action on the player’s part.

Once the troll is neutralized, head to the southwest corner of the cave to find the corpse of a novice conjurer. Next to it, you will find a large coin purse, an unusual gem, and a copy of the book Before the Ages of Man.

Before the Ages of Man

Before the Ages of Man is an Illusion skill book that only spawns in a limited number of locations throughout the game. Reeking Cave is one of the easiest to find and a must-get for any player looking to level up their Illusion skill. To do so, you have to open the book up; you don’t even have to flip through its pages or read it.

The unusual gem is part of a long quest that sees players tracking down 24 of them for the No Stone Unturned quest. The gems are used to recreate the Crown of Berenziah, which is a highly valuable artifact once assembled.

This is the main quest associated with the Thalmor Embassy. It is part of the main questline and sees the Dragonborn infiltrating a party at the embassy with a stolen invitation to steal Thalmor intelligence files on the return of Alduin and the dragons.

Your path through the embassy in this quest will be pretty guided, but you will also have the opportunity to explore the different areas of the embassy and collect as much loot as you want.

This quest sees the Dragonborn tracking down 24 unusual gems that are scattered across the province for Vex in the Thieves Guild. The quest can be started by finding anyone of the 24, and it is unusual for Skyrim in that it does not include any quest markers for where to find the gems.

This means that you can easily walk past them if you don’t look carefully enough, so make sure you grab the one at the end of the Reeking Cave so that you don’t have to return and fight your way through the embassy again to reach it.

When you go to the Thalmor Embassy during Diplomatic Immunity, the guests attending the party depend on what other quests you have progressed before arriving. However, the embassy is always home to many guards and five key residents.

Elenwen is the First Emissary of the Thalmor to the people of Skyrim and is also a powerful sorceress. She leads the efforts of the Thalmor at the embassy, from meddling with Nordic politics to investigating the return of the dragons and how serious of a threat it should be considered.

She also has a taste for lavish parties and celebrations, which is why the embassy hosts so many high-profile galas.

Tsavani is a Khajiit that acts as the embassy’s chef, although little else is known about her. The only interaction players have with her is when they are led into her kitchen during Diplomatic Immunity, where she comments on not liking unexpected visitors in by her.

Brelas is a Wood Elf that works as a pawnbroker who attends the party at the embassy. Very little is known about her beyond her occupation.

Malborn is a Wood Elf servant in the embassy who plays an informant for the Blades. The Dragonborn first meets him in Solitude, where Malborn offers to help smuggle their equipment into the party.

Depending on your actions during the quest, you can either help him escape the embassy, or the Thalmor will eventually kill him. If he is saved he flees to Windhelm where he resides at the New Gnisis Cornerclub.

Question: How Do I Get My Stuff Back after Visiting the Thalmor Embassy?

Answer: To get your gear back after the quest, you have to return to Delphine in her secret room at the inn in Riverwood.

Question: What Should I Have Smuggled Into the Thalmor Embassy?

Answer: This largely depends on your playstyle, but you’ll want whatever gear your character is proficient with. This could be your weapons, armor, and potions to help keep you on your feet or cast spells.

Question: Can I Get Back Into the Embassy after the Quest?

Answer: After finishing Diplomatic Immunity, the Thalmor Embassy will be locked and can only be opened with a key that you cannot find in the game. However, you can still glitch your way into the building.
To do this, you have to ride your horse up the stairs to the left of the entrance over to a tree next to the fence. If you repeatedly jump in between the fence and the tree, you will be able to climb your way over the fence and onto the other side. From there, you will have free reign to go wherever you wish inside.

The quest does most of the heavy lifting to get you through the environment, but it has some great moments and characters and plenty of helpful loot to make it worth your while. However, make sure you don’t go into the embassy too much before doing the quest, as that can bring up plenty of Skyrim‘s iconic bugs to give you a headache.