My love affair with archery in video games began in the first game of the Fable franchise. I’m specifically talking about the free-aim mode. Find the nearest bandit, pull out a bow, use free-aim while aiming for the head, and let an arrow fly. If done correctly, the bandit’s head will pop off and spin in the air like a top for several seconds before plopping to the ground.

I found this hilarious as a kid, and I still do now. From that point on, I was a bowman. And that’s when I started to see how effective archery is as a form of combat.

There are many different builds that you can utilize in Skyrim, and none are more blatantly OP than the infamous stealth archer. Don’t try to deny it; we’ve all done it at least once (Those of us who have played Skyrim before, that is).

For those of you just now coming into the world of Skyrim for the first time, maybe archery hasn’t been your thing in gaming before. And that’s okay; I like bonking people in melee combat or blasting them with magic as much as the next person. If you need a couple of lessons in marksmanship to get your footing in Skyrim, someone can help you with that. If you can find her, that is. 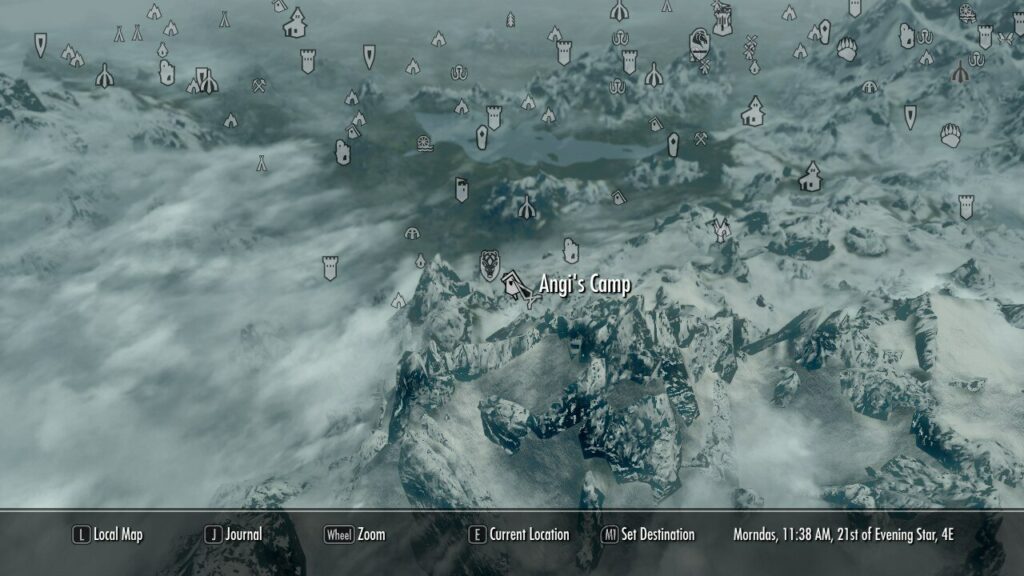 Angi’s camp is southeast of Falkreath and east of Ancient’s Ascent.

Composure, Speed, and Precision is the unmarked quest you take on by asking if Angi can teach you some things about archery. 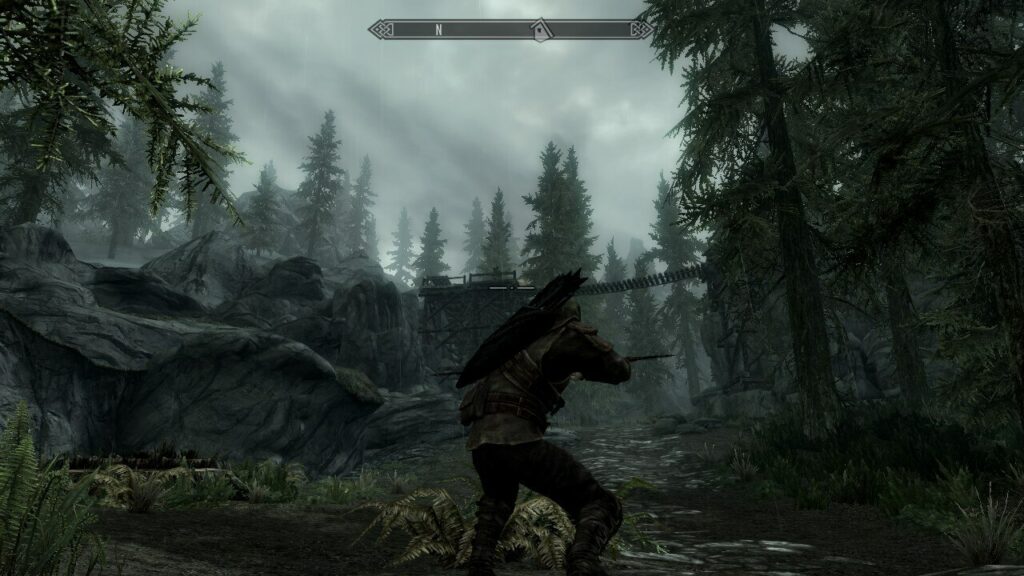 Head east out of Falkreath and follow the path until you see a bandit bridge. There will be a bandit on each side and two falling boulder traps. Even if the bandits never detect you, these traps always activate, so be careful. Once you take care of the bandits, head further up the path and look to your right for some stone markers.

Head up here until you reach a stream that may or may not have a bandit ambush party nearby. Make a mental note of this area as you may come here hunting the White Stag during the Ill Met By Moonlight quest. 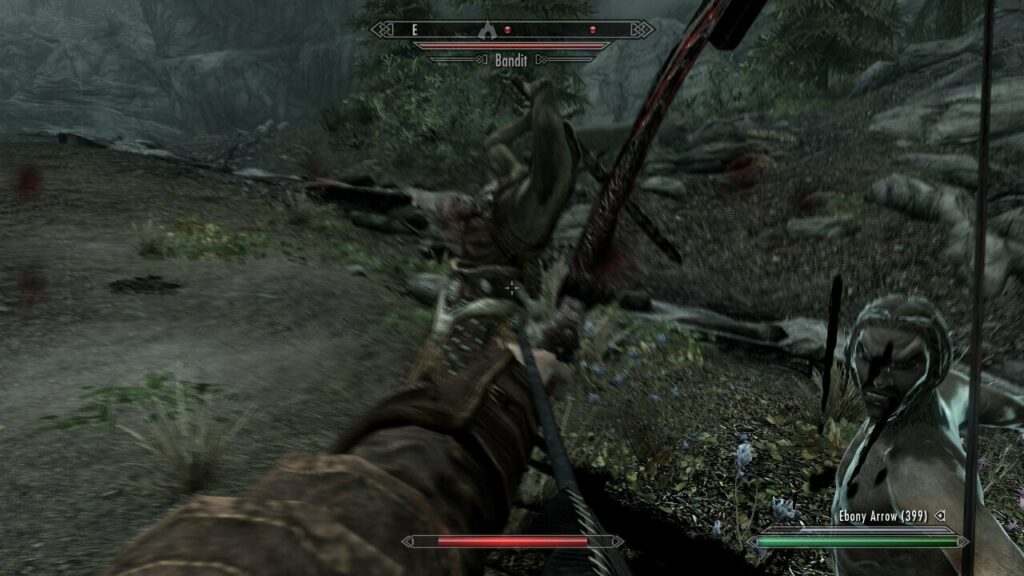 Kill the bandits (If they’re here) and then cross the stream and take the path up the mountain. It’s a long, winding path, but you’ll know you’re heading in the right direction when it starts to snow. Eventually, there will be a branch.

The left will lead to the dragon’s lair, Ancient’s Ascent. The path on the right will take you to Angi’s Camp. She picked one heck of a place to call home (To be fair, dragons just recently came back, and she couldn’t have known about it). 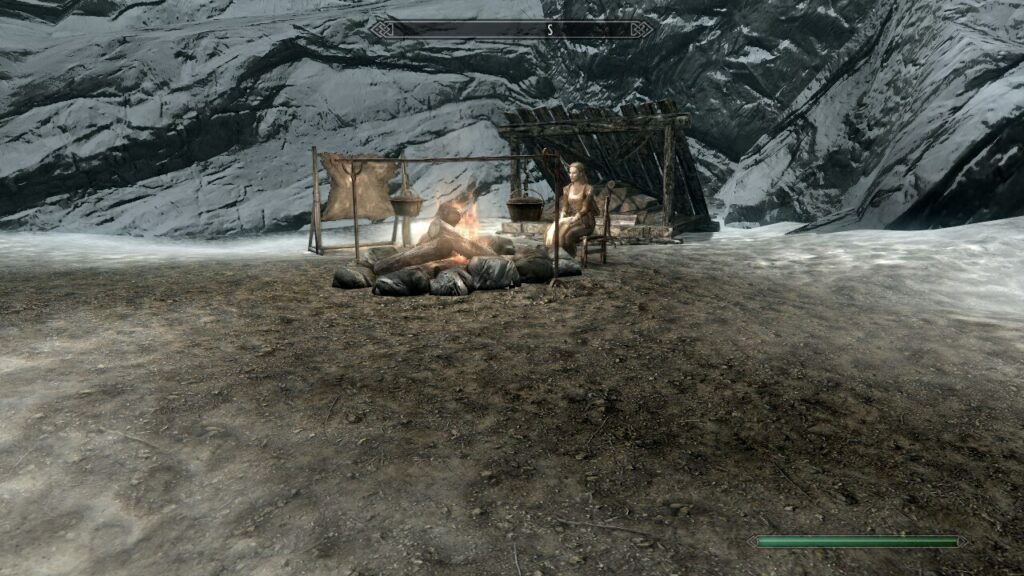 Angi will likely be outside by the campfire. Speak with her, and she will greet you by threatening to put an arrow in your head if you do anything stupid. That’s one way to break the ice. Calm her down by assuring her that you mean her no harm, and she will apologize. Ask her about her backstory, and you’ll soon find out why she reacted the way she did.

It turns out she’s from Helgen, and she’s been living up here for a few years now. Ask her why she lives here by herself, and she will reveal that she’s been on her own since the deaths of her family. Two drunk Imperials killed them all under unknown circumstances.

You can offer to take care of the two Imperials for her, but she tells you she already did it, hence why she’s hiding here. Given the events that transpired in Helgen, her family’s tragedy may be the only reason she’s still alive. 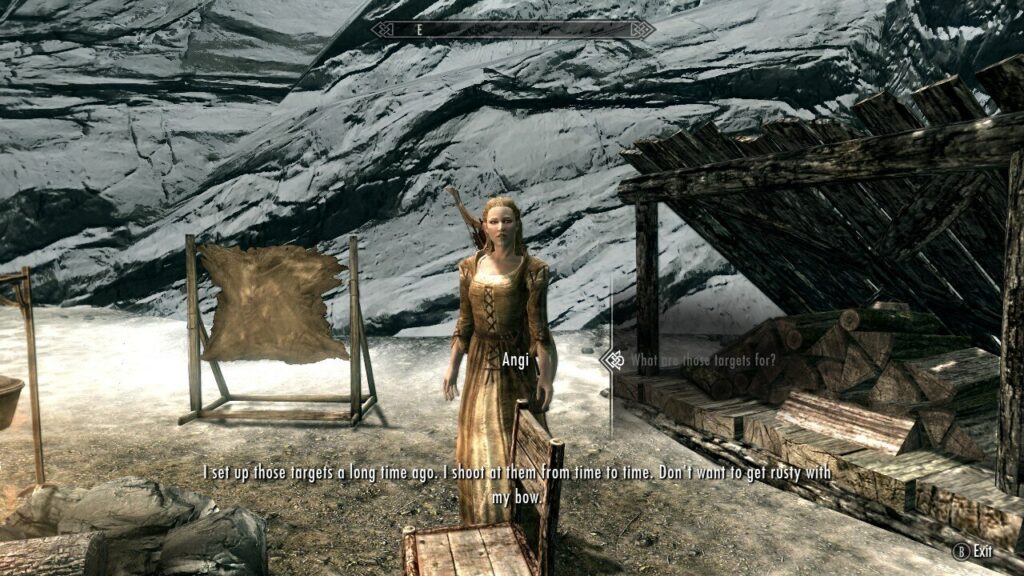 The conversation is pretty dark right now, so change the topic by asking her about the targets. Angi is skilled with a bow and created a range to keep herself from getting rusty. She will offer you some archery practice should you need or want it. Accept her offer, and let’s get down to business.

Angi will lead you down to the range and provide you with some backstory details of her life and how she came to use the bow before explaining the rules of her tests. You must stay within the boundaries and follow her instructions. 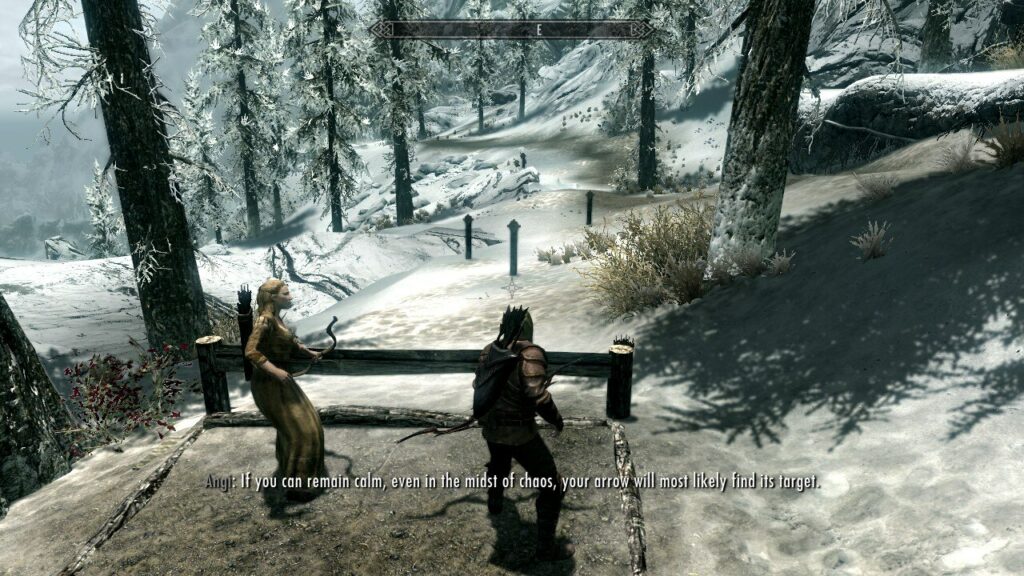 The first test is about keeping your composure to ensure you hit your mark. It requires you to hit the three closest targets with practice arrows. Speak with Angi to get some (Maybe collect more than what you’ll need. I think they make for good mantlepieces).

Skyrim isn’t Kingdom Come: Deliverance. Archery is easy to master, and the only thing you need to remember is to account for arrow drop. Hitting each target will level up your Archery skill one time for three easy level-ups. Hit all three to pass the first test. 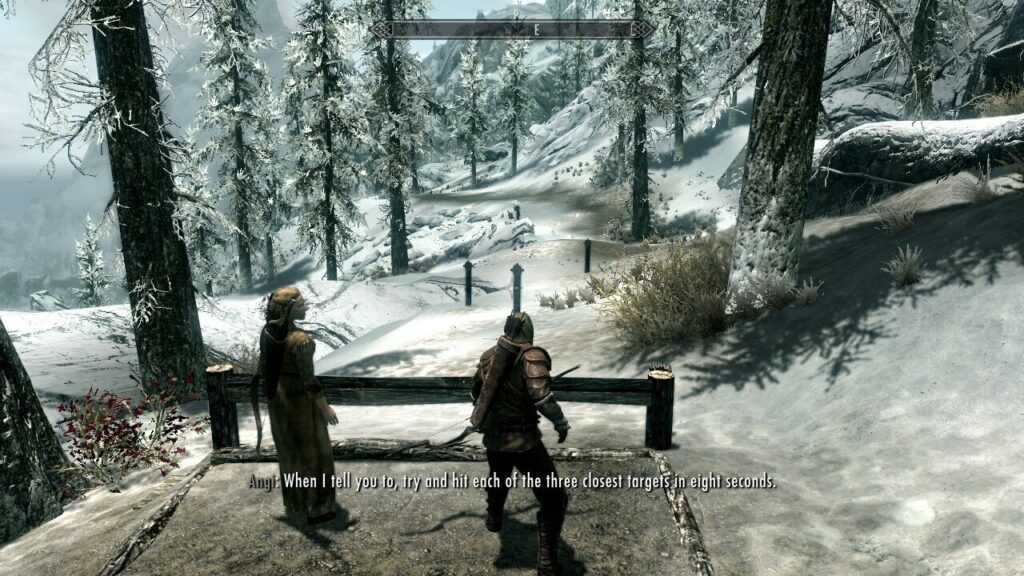 The second round is about speed. You need to hit all three targets within 8 seconds to pass. It’s easy to do since you’re allowed to aim at a target before Angi says to start.

If you’re having trouble, you can use a few shouts or Archery perks to help you. The Slow Time shout and or Eagle Eye and Steady Hand perks can level the playing field for you. Hit each target within eight seconds to get another Archery skill point and pass the test.

The third test is about precision. There’s actually a fourth target far behind the first three, and you need to hit it. It blends in perfectly with its’ surroundings, and it’s not hard to overlook it. 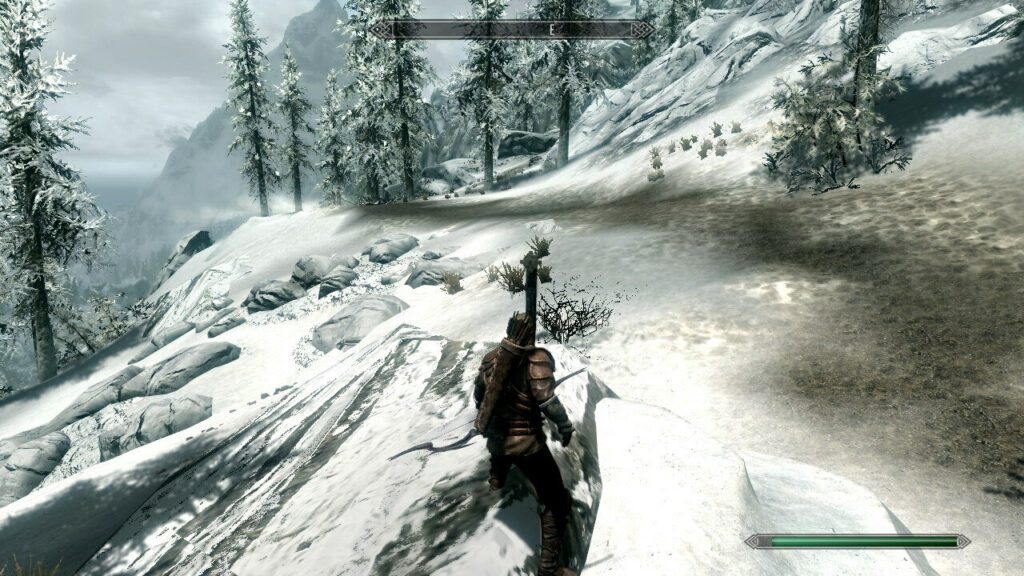 Feel free to head out into the range to confirm the location of the fourth target. You won’t be penalized for doing so. 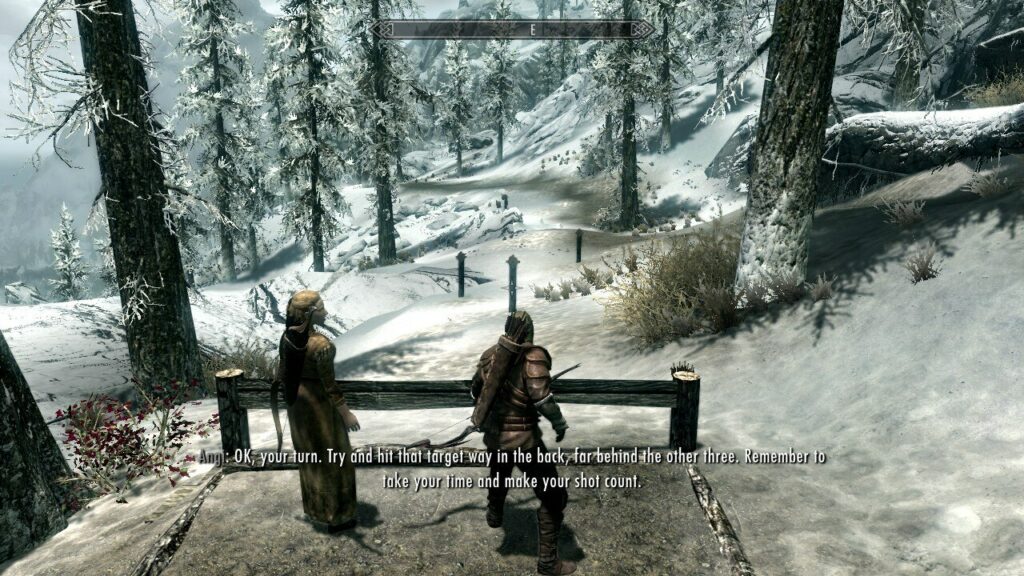 Head back to the training area and snipe the fourth target. Doing so successfully earns you another Archery skill point and passes the test. One more to go! 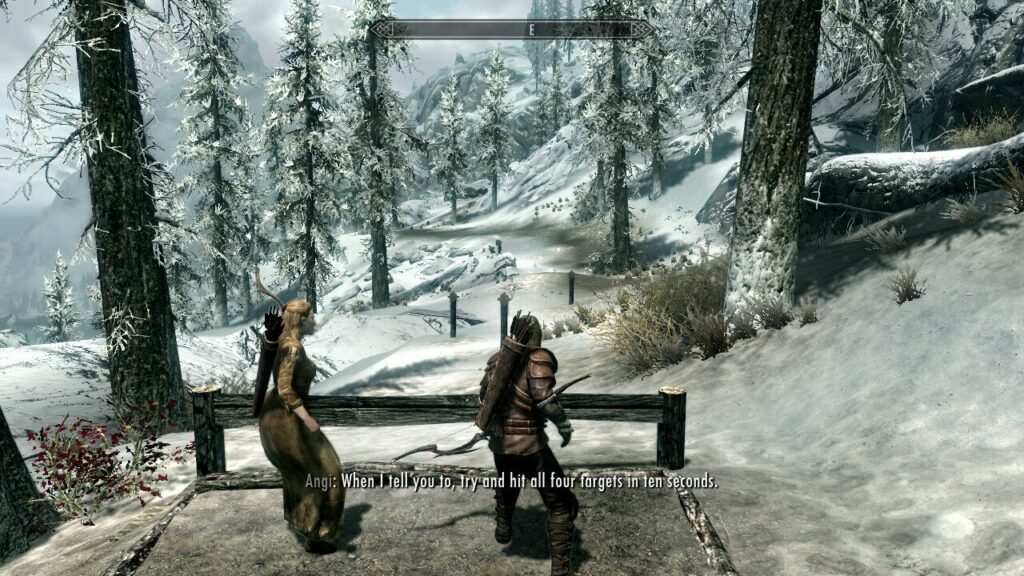 The fourth and final test will combine all three elements of the previous test into one. You need to hit all four targets within ten seconds to pass. Like with the second test, you are still allowed to aim before Angi shouts go, so lock on your bow to the fourth target. Use Slow Time or Eagle Eye and Steady Hand if necessary.

Hit every target within ten seconds to earn a sixth and final Archery skill point. You have completed all of Angi’s trials! 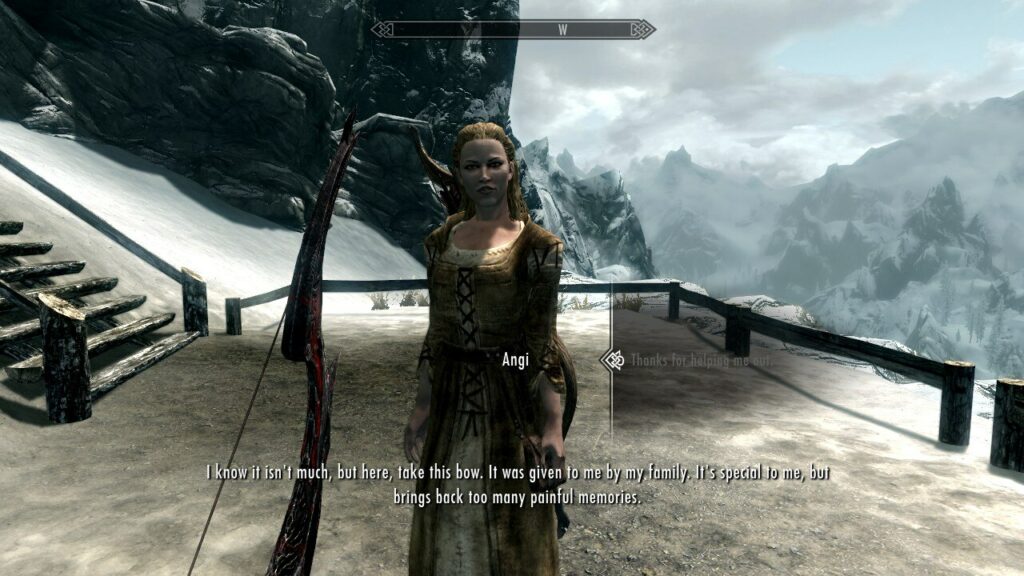 After completing all of her trials, Angi will remark that she has nothing left to teach you. So long as you’ve been friendly with her, she will also give you a bow of hers, aptly named Angi’s Bow. It’s important to her but brings back painful memories, so she wants you to have it.

Is Angi’s Bow Any Good?

Angi’s Bow is a unique Hunting bow, so it’s only decent early on. You can enchant it, but this ability is offset by how bad Enchanting is at a low level. You’ll be better off buying a pre-enchanted bow from a blacksmith because even the lowest-tier bows will be better than what you can make.

If this were Morrowind, this wouldn’t be a problem. Back then, you could pay enchanters to create powerful enchanted items for you. It cost a fortune, but making money has never been an issue in The Elder Scrolls. From Oblivion to the present day, you need to enchant items yourself. By the time you can enchant Angi’s Bow with something good, you’ll have access to much better bows. You can really buff up its’ damage by improving it with full Fortify Smithing gear, but eh.

Before we leave here for good, let’s check out what Angi has in her cabin. I’m sure she won’t mind.

There’s a free hunting bow and some practice areas leaning against the wall outside. Inside, you can steal a coin purse, some garlic, elves ear, and dried frost mirriam. 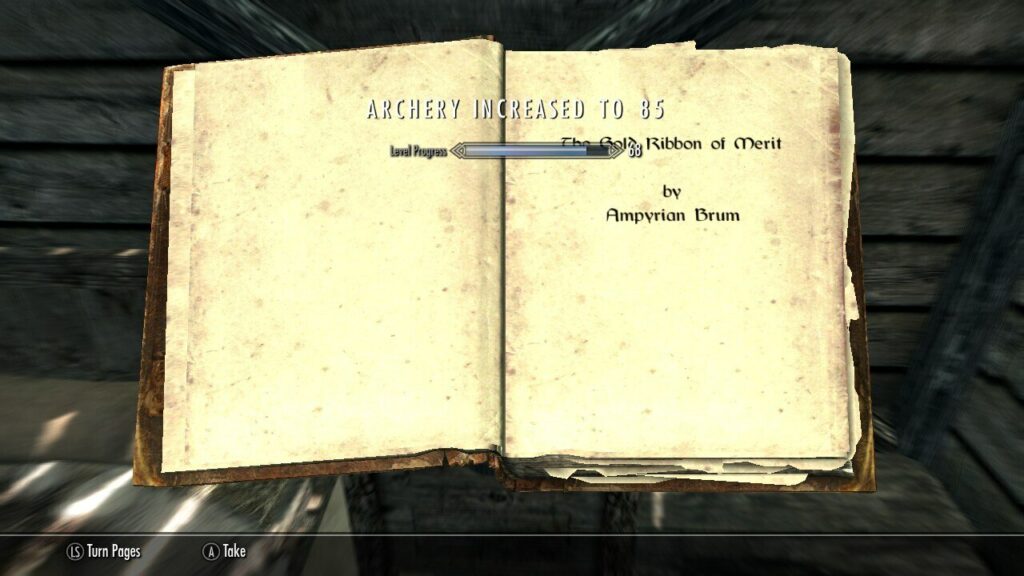 The best prizes are inside Angi’s bedroom. If you’re not against stealing from Angi, there’s some decent random loot in the chest on the left. On the right is an end table with a copy of The Gold Ribbon of Merit, an Archery skill book. Inside the end table is the Treasure Map V. 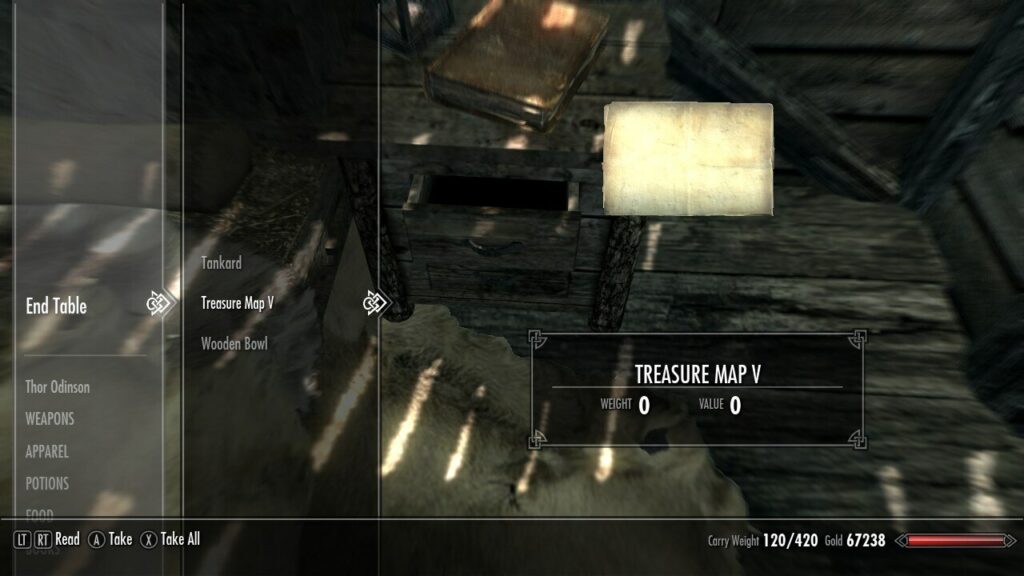 And that’s everything of interest at Angi’s camp. If you have Become Ethereal shout, taking the scenic route down the mountain is fun. Otherwise, fast travel or huff it on foot to your next adventure.

Getting The Most Out Of Angi’s Training

Before I leave you to your adventures as the Legolas of Skyrim, I want to clarify one thing: You can take Angi’s training at any level. Angi’s lessons are clearly for beginners, but a level 75 Dragonborn with more arrow kills than The Hood can still learn from her. As a result, this is the fastest way to reach level 100 Archery.

Train up Archery by using it in combat. It’s up to you whether or not you want to purchase Archery training from trainers. I find there to be other skills in Skyrim far more annoying to level up, and training Archery would be a waste (Since you can only use trainers five times per level). But it’s up to you. Refrain from reading any Archery skill books.

Angi is the best skill trainer in the game since even Master trainers cannot level you past 90 in a skill. Don’t waste this opportunity.

Question: Is Angi Available for Marriage?

Answer: Unfortunately, no. You can’t make her a follower either. I feel bad how Angi thanks you for keeping her company, knowing that you can’t interact with her any further.

Question: Does Angi’s Bow Scale with Your Level?

Answer: It does not. It’s just a Hunting bow with Angi’s name on it somewhere.

Question: Can Angi be Killed?

Answer: Yes. Angi is not an essential NPC and can die. If there are dragons about, you may want to quicksave in case she bites the bullet. You don’t want to miss out on her training.

I always marvel at how a game could be out for years with hundreds of hours poured into it, and I still manage to find new things. I always went to Ancient’s Ascent via Bonechill Passage and, for some reason, never bothered to explore the surroundings. 11 years of 6 Archery points wasted. Do you know how slow it is getting Level 100 Archery via combat?

Well, I do, and I can assure you, never again. And after reading this guide, you won’t have to go through that misery either. Now go on back into the world of Skyrim and let some arrows fly.