Skyrim’s launch list of companions was a bit of a mixed bag. We have Lydia, the easily accessible housecarl who boosts high melee and archery stats, and J’zargo, the Destruction Mage who levels with you up to a cap of 81. We have borderline useless potential followers like Sven and Roggi Knot-Beard, who have terrible combat stats and a pitiful level cap of 20. Not even good enough for use as human shields.

Then we come to Erik the Slayer. At first glance, he might not seem like much, but with some experience, he surprisingly becomes one of the best followers you can have watching your back. If you can convince his dad to live out his dreams, that is. 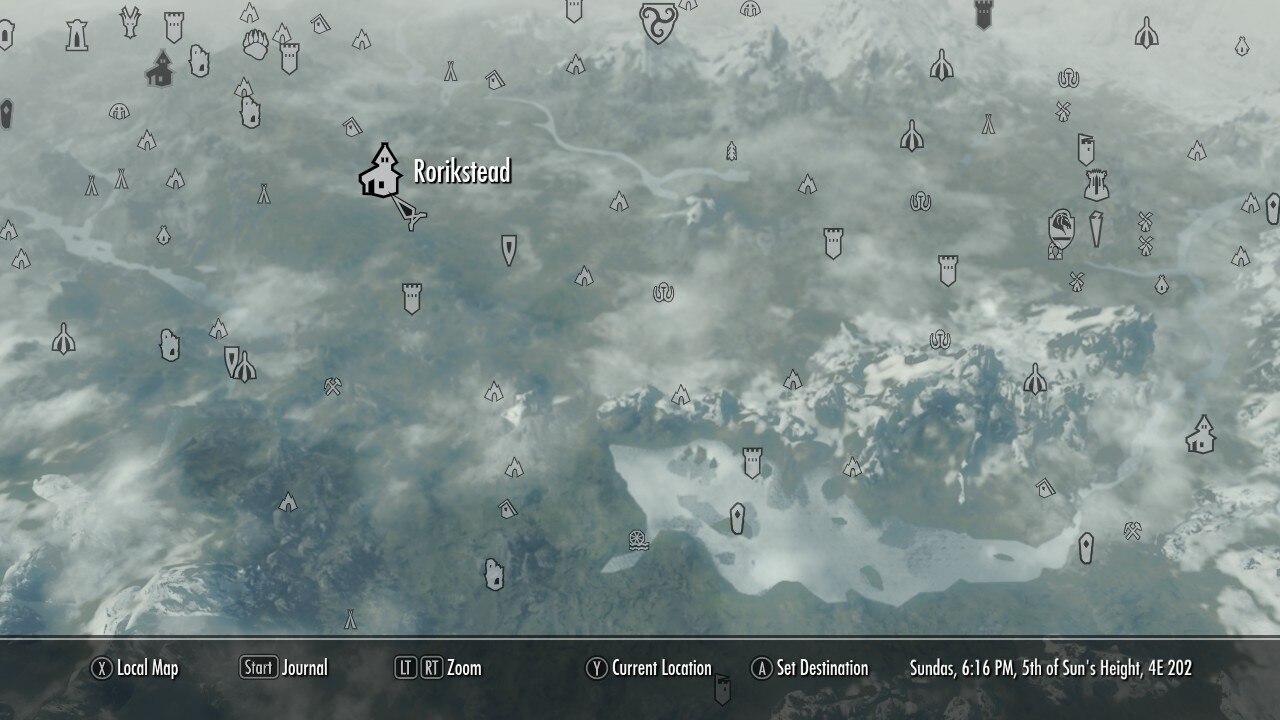 Erik lives in the village of Rorikstead, northwest of Whiterun. 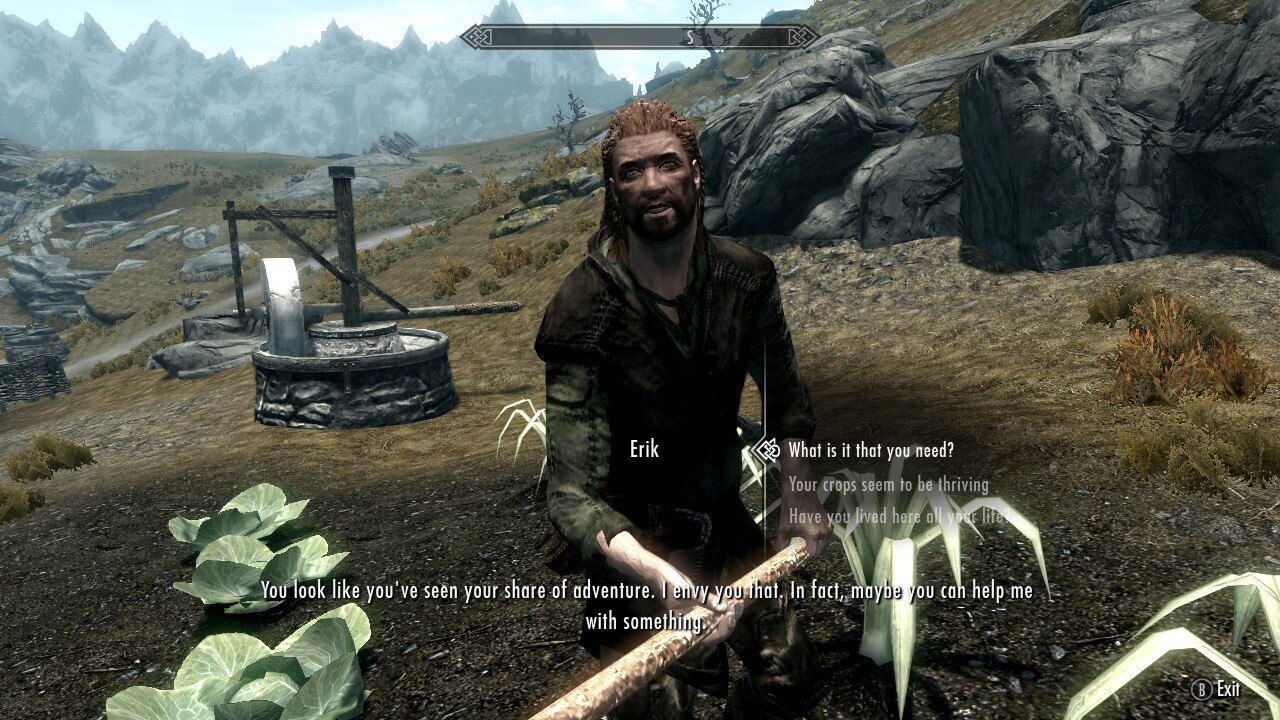 Travel to the village of Rorikstead, where you will find Erik hard at work at Lemkil’s farm. Speak with Erik, and he will note that you look like you’ve seen plenty of adventure on your travels. He’s envious of you and asks for your help with something.

Erik’s father, Mralki, is a former Legion soldier who fought in the Great War and the owner of the Frostfruit Inn. Erik would like to become an adventurer like you, but his father forbids it and wants Erik to stay in Rorikstead doing farmwork. 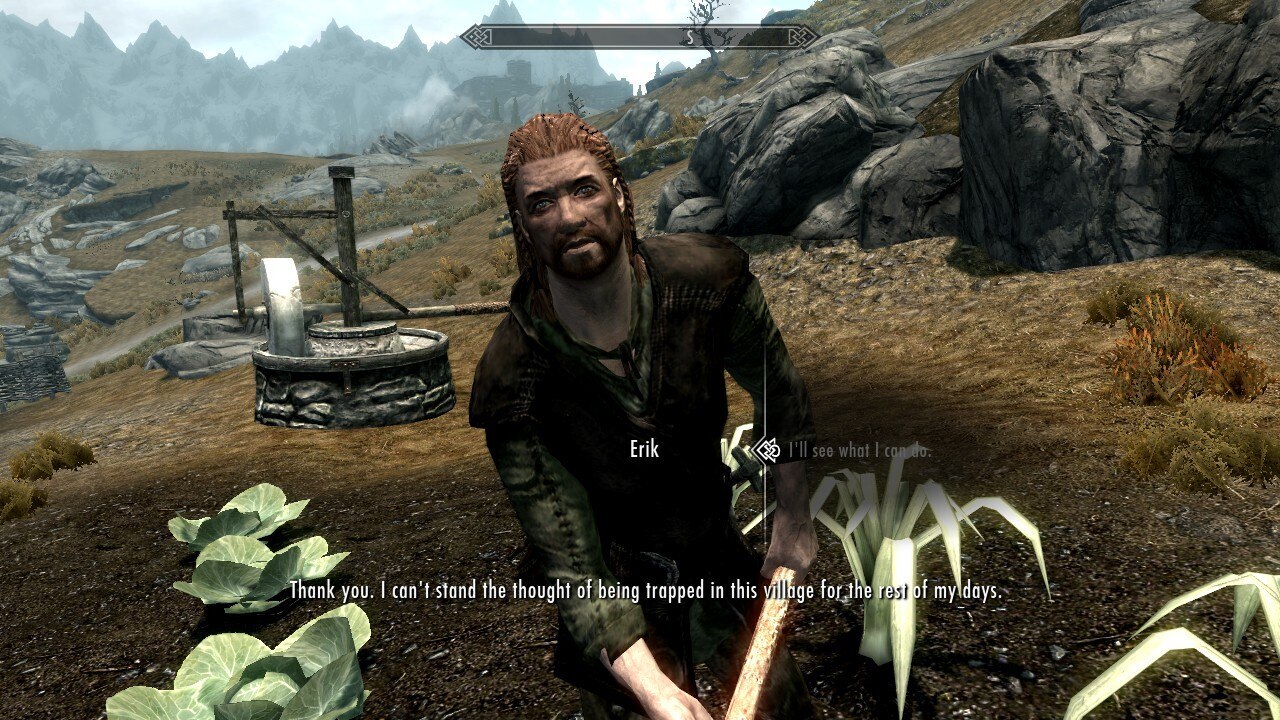 Erik would also need armor to be an adventurer, but neither he nor his father could afford it. One step at a time, though. The first business to settle is getting Mralki’s blessing to allow Erik to do what he wants with his life. 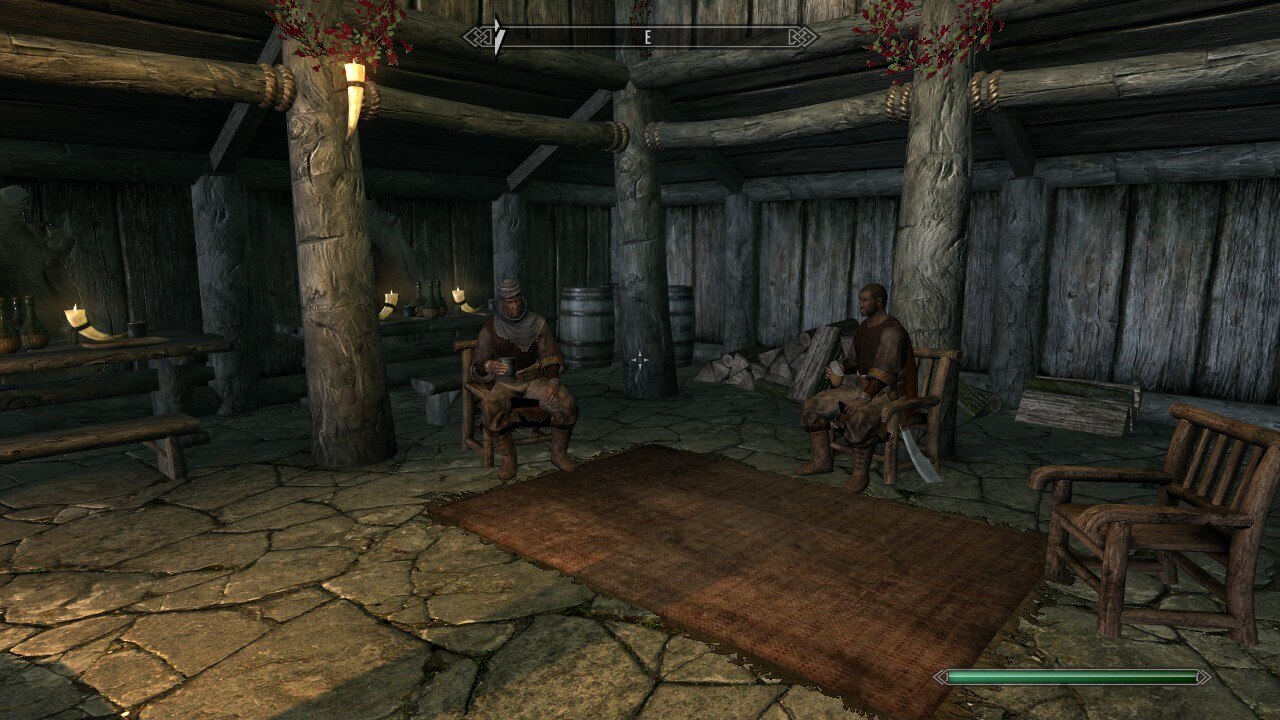 Head for the Frostfruit Inn across from Lemkil’s farm. If you’ve yet to complete the In My Time of Need quest, the two Alik’r warriors will be here. 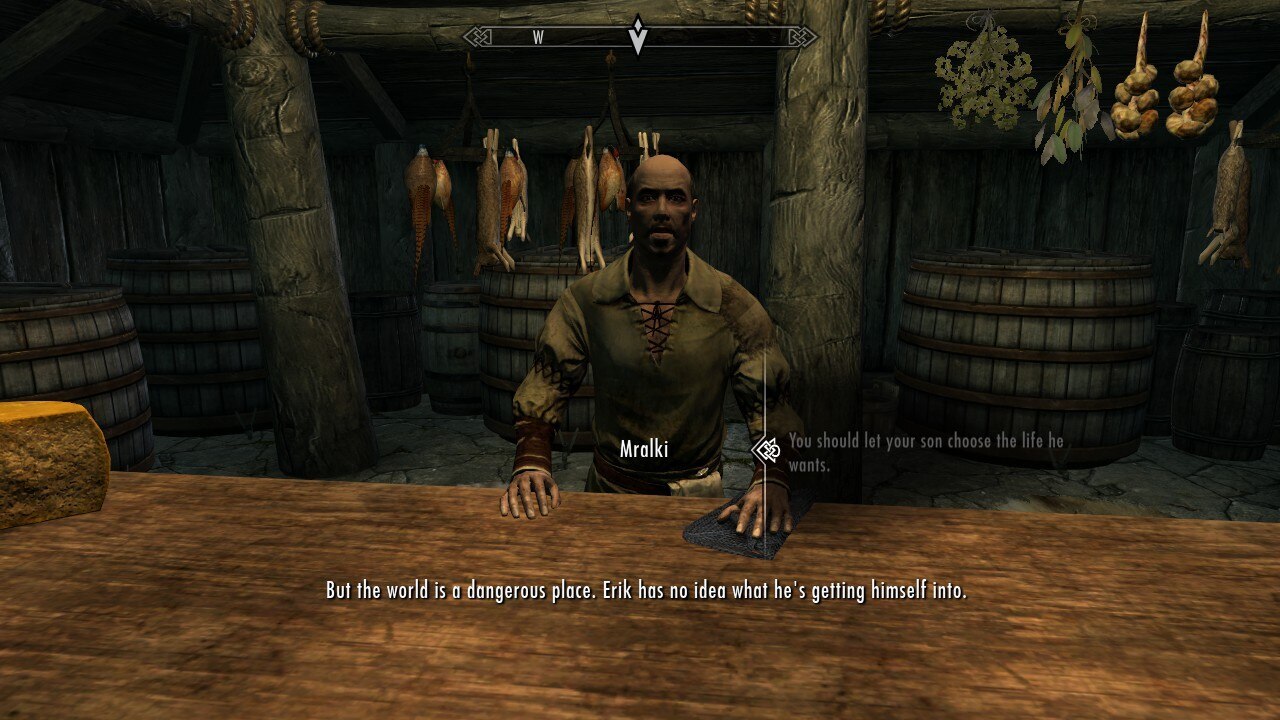 Speak with Mralki at the bar about Erik, and he remains adamant that his son should not try to become an adventurer. Mralki knows how dangerous the world can be, and Erik is too inexperienced and naive to deal with those dangers. He also mentions that it would be impossible for Erik to venture out into Skyrim without armor.

From this point, you can pass either a Persuade or Intimidate Speech (Not sure how Erik would feel about you threatening his dad, though) check to convince Mralki to allow Erik to live his life the way he wants. You can also “bribe” Mralki with enough gold to get Erik some armor. For storytelling purposes, the Persuade check offers the best dialogue from Mralki. 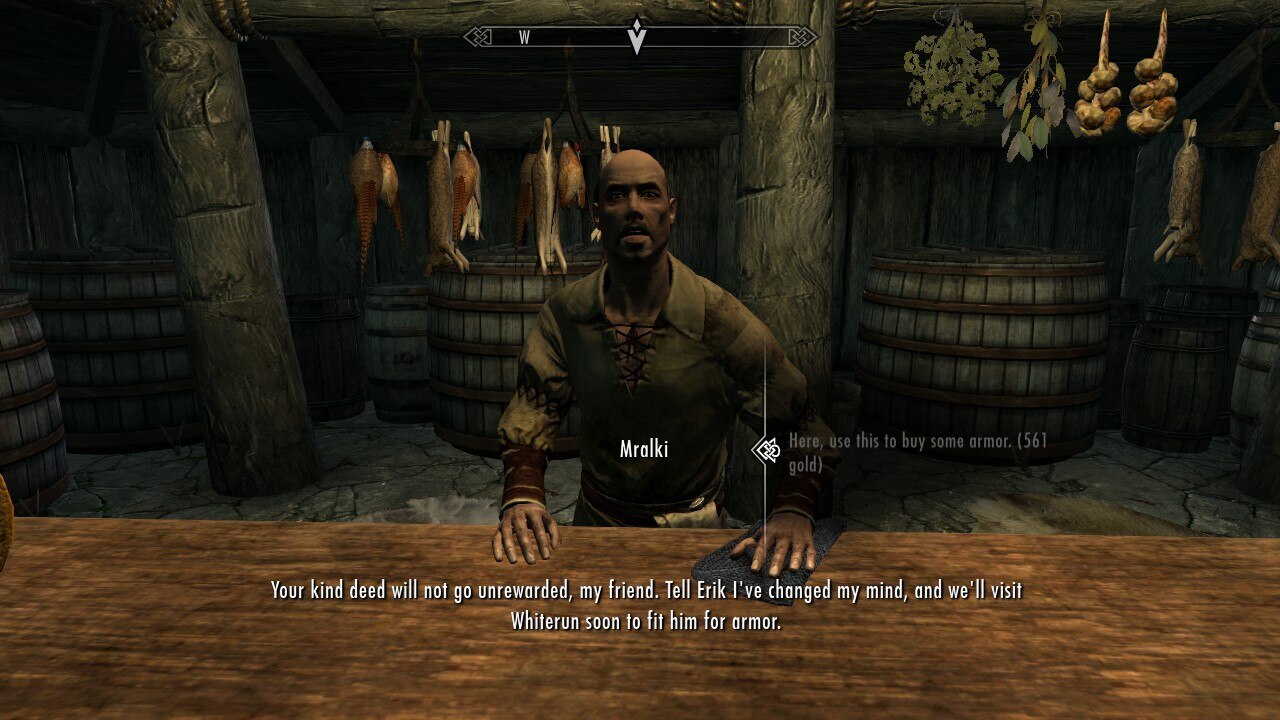 Mralki admits that Erik is all the family he has left but also acknowledges that he shouldn’t hold his son back from doing what he wants. Mralki asks you to tell Erik that he changed his mind and that he and his son will travel to Whiterun soon to get Erik fitted for armor. 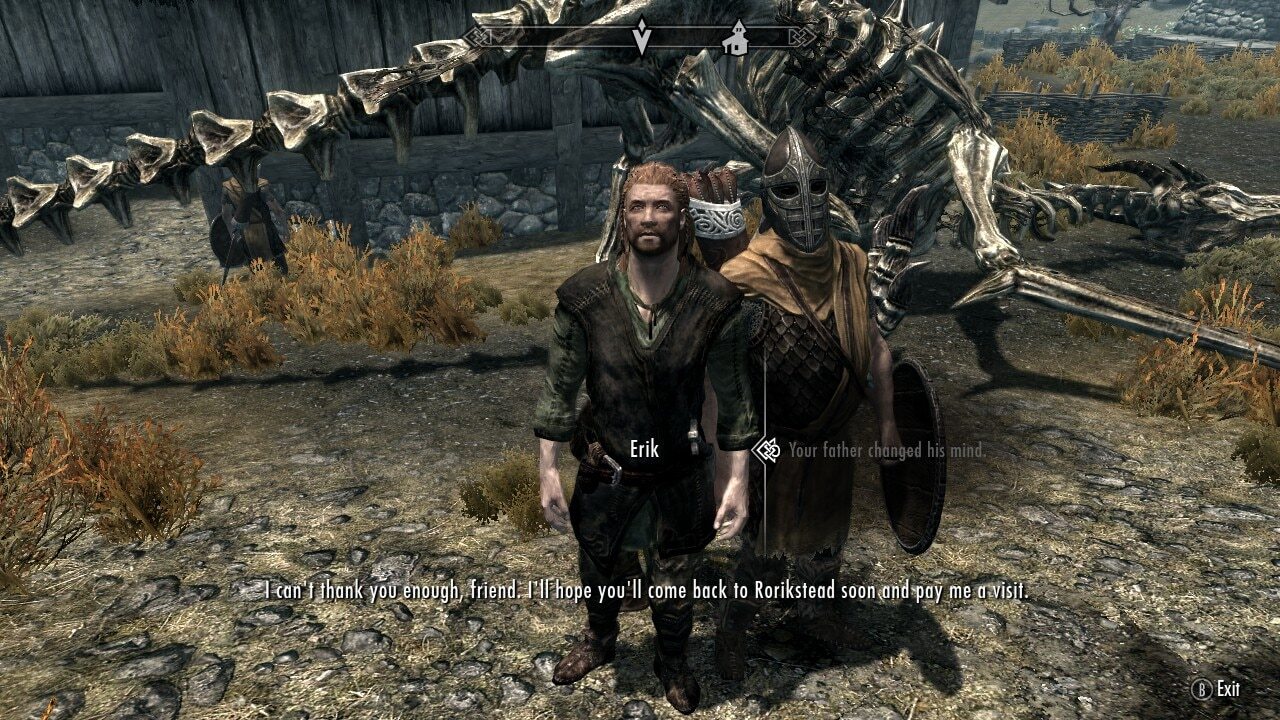 Head back to Erik and tell him the good news, and he will give you his heartfelt thanks. He asks that you stop by Rorikstead again to visit him one of these days. 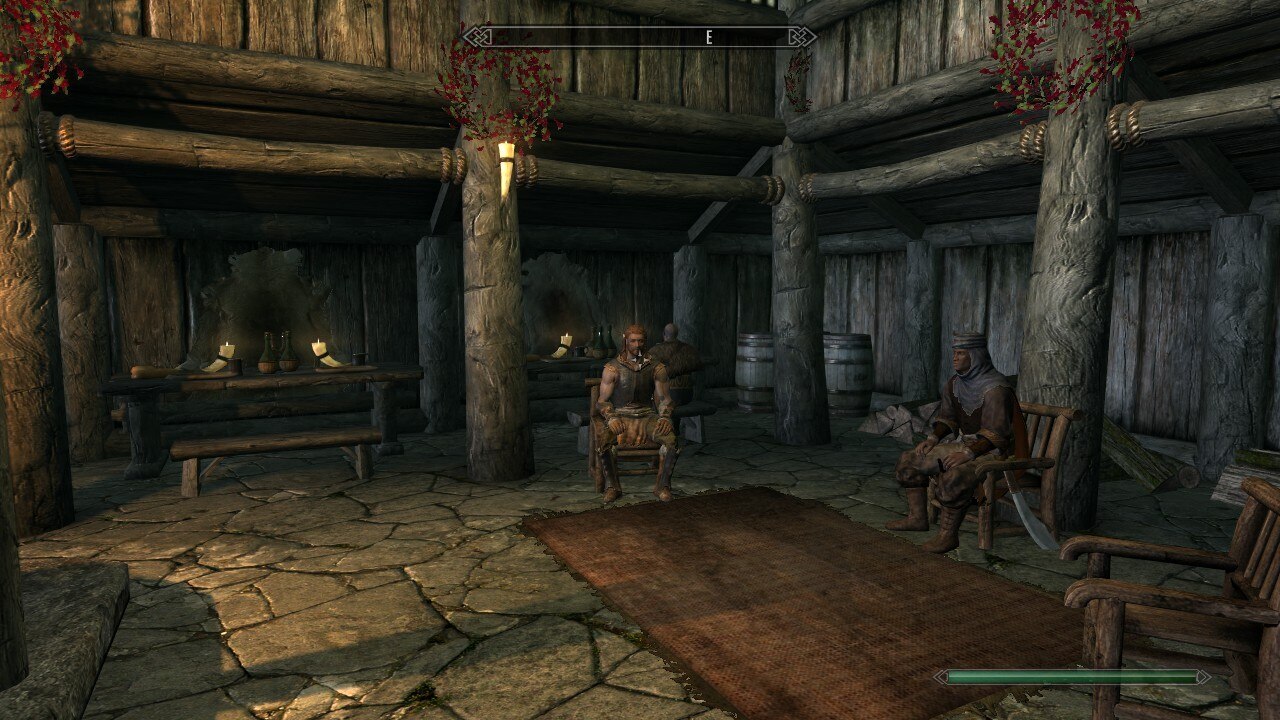 Leave Rorikstead and go clear out a cave or a crypt. Fast-travel back to Rorikstead, and you’ll notice that Erik no longer works at Lemkil’s farm. Instead, he will be in the Frostfruit Inn in his new armor.

Erik also sports a new name, now being Erik the Slayer. His father suggested he name himself honestly, but no one would fear an adventurer named Erik Greenthumb. 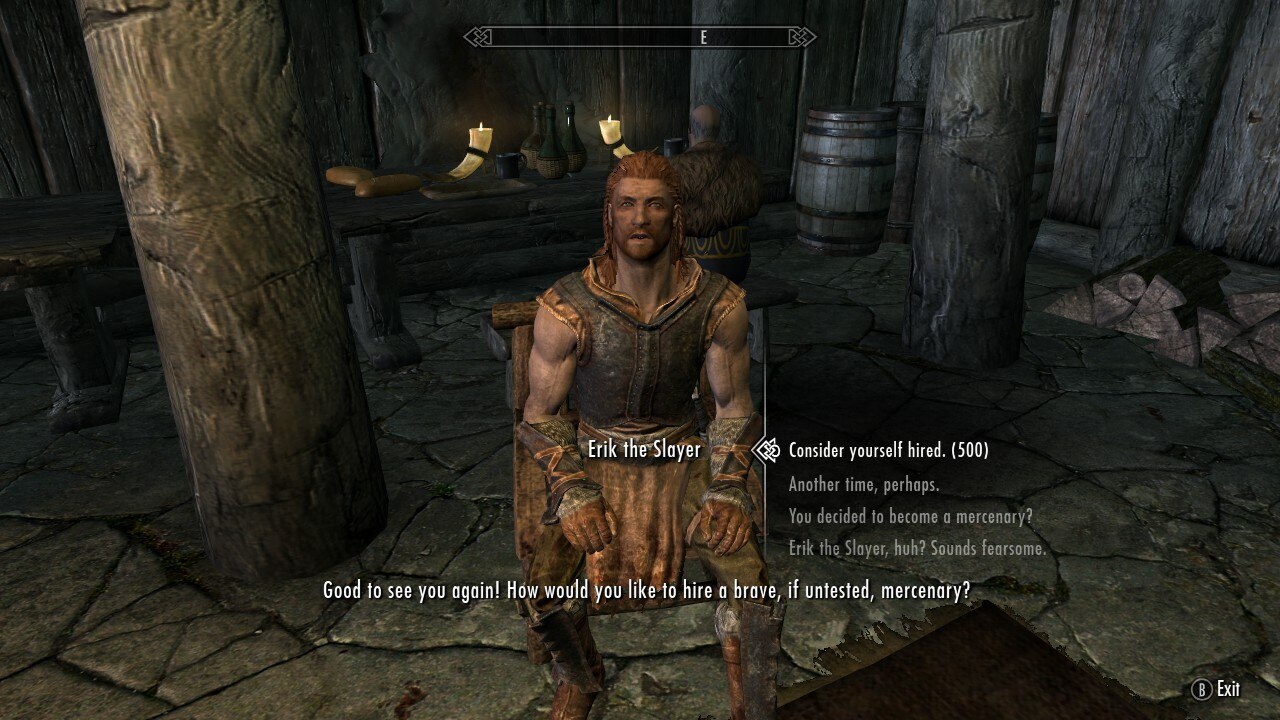 Erik greets you warmly and asks if you’d like to hire a brave but untested mercenary. At this point, Erik the Slayer will be available as a companion after paying a fee of 500 gold. If you dismiss him, you can bring him back into your service at no additional cost. Agree to pay him, and let’s see what this starry-eyed mercenary can do.

Is Erik the Slayer a Good Companion? 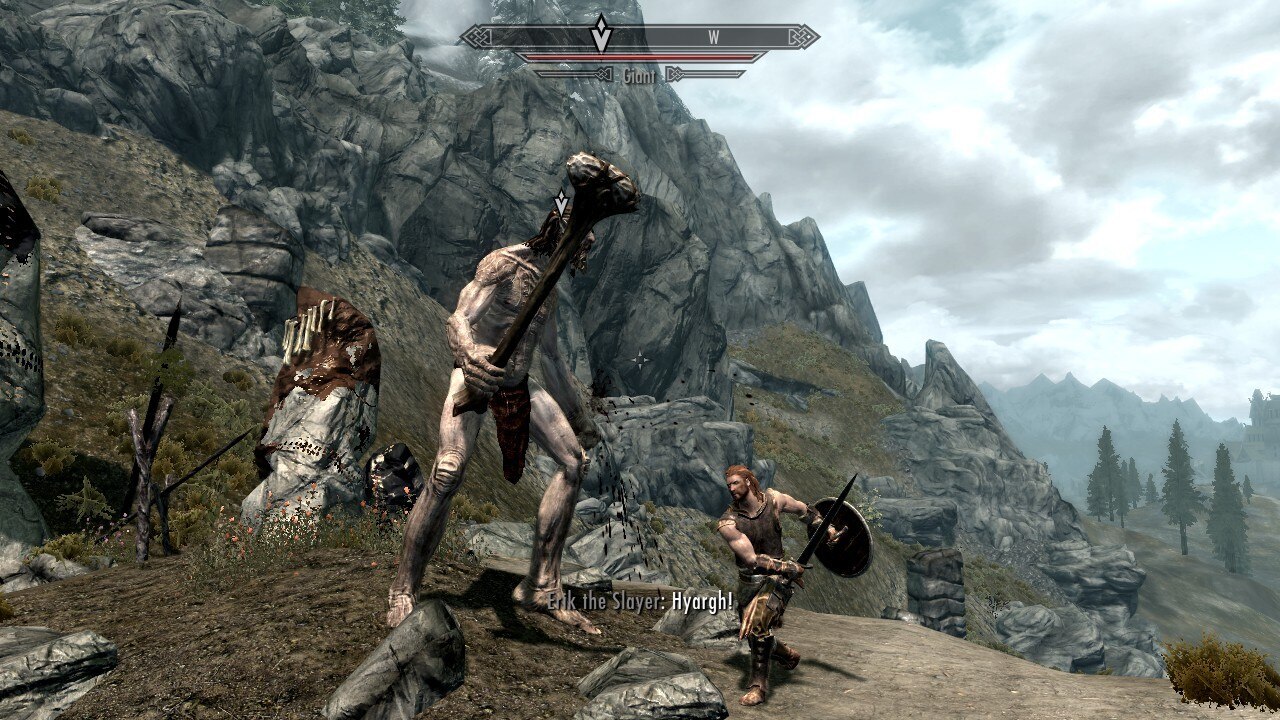 Erik is a Barbarian with the favored skills of One-Handed, Two-Handed, Light Armor, Block, and Archery. He starts at level 10 and levels with you up to a cap level 40 like all mercenaries. Erik starts with 255 HP, making him very durable in the early game, and caps out at 605 HP, making him one of the more tanky followers in Skyrim. What’s odd about Erik is his starting gear and preferred skills.

He favors Light Armor, achieving 100 in the skill when he reaches level 40, yet wears iron armor. His One-Handed skill caps out at 49 while his Two-Handed starts at 44 and caps at 100, yet he uses an iron sword. He has 78 Block at level 40 yet prefers Two-Handed weapons. He can achieve an Archery skill of 73 at max level, which is close to Expert level.

I suppose we can chalk it up to Erik being an inexperienced adventurer trying out all sorts of things, but his loadout is a mess when he first joins you. As a result, he may not be the greatest in the early game if you like the gold or skill to buy or craft weapons and armor that suit him. 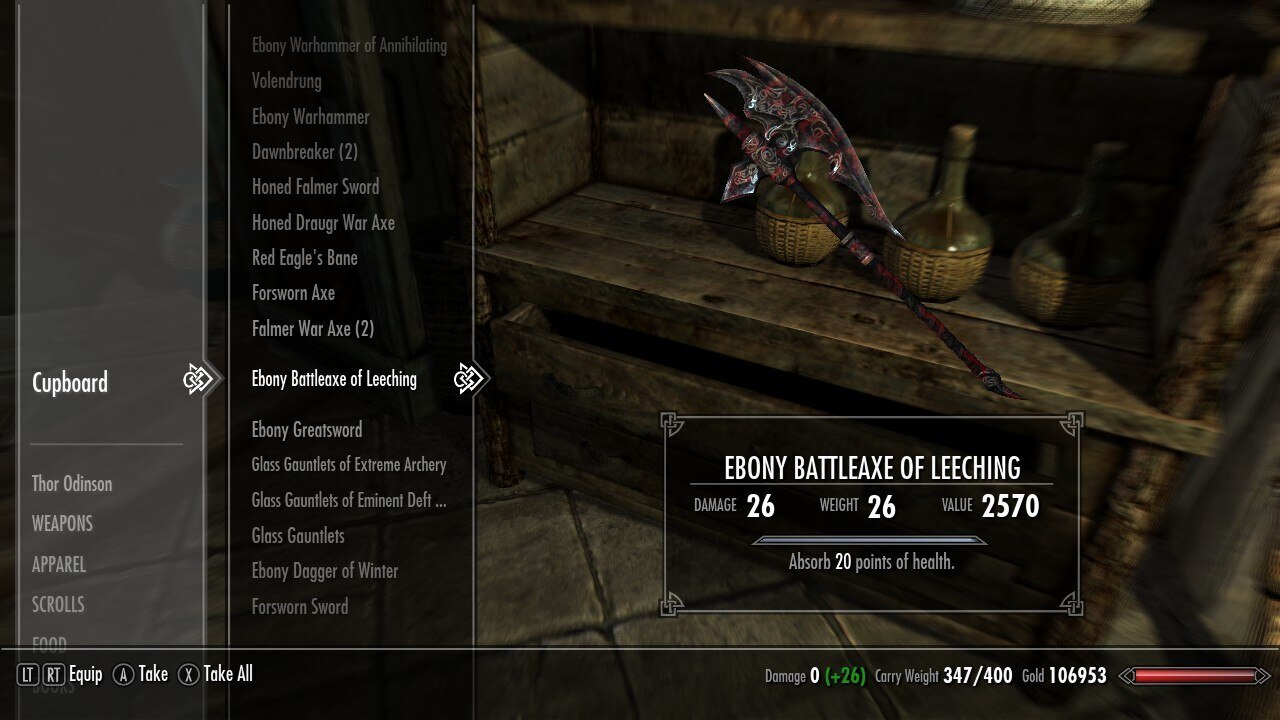 Erik doesn’t struggle to do damage in combat. With his maxed-out Two-Handed skill, any tempered two-handed weapon will do wonders in his hands. I prefer giving him something that has the Absorb HP effect since he likes close combat.

Erik is also one of the more intelligent companions who will usually bring out a bow to attack magic users who are considerably far away. For a guy who lacks experience, he sure doesn’t lack battle intelligence. Since his Archery skill doesn’t max out, I go for a bow with an offensive enchantment like Shock or Frost damage.

Unfortunately, you may run into a problem with Erik’s bow preference. When you give him a stronger bow but take it back for any reason (For example, increasing your Smithing level and wanting to temper it further), he uses his default bow even if you give him his better bow back.

Erik’s stamina caps out at 180, which is somewhat low for someone who favors two-handed weapons. For this reason, I tend to give him armor with double enchantments buffing his HP and stamina. You’ll need level 100 in Enchanting to pull this off, so until then, give him rings and necklaces that increase his stamina. 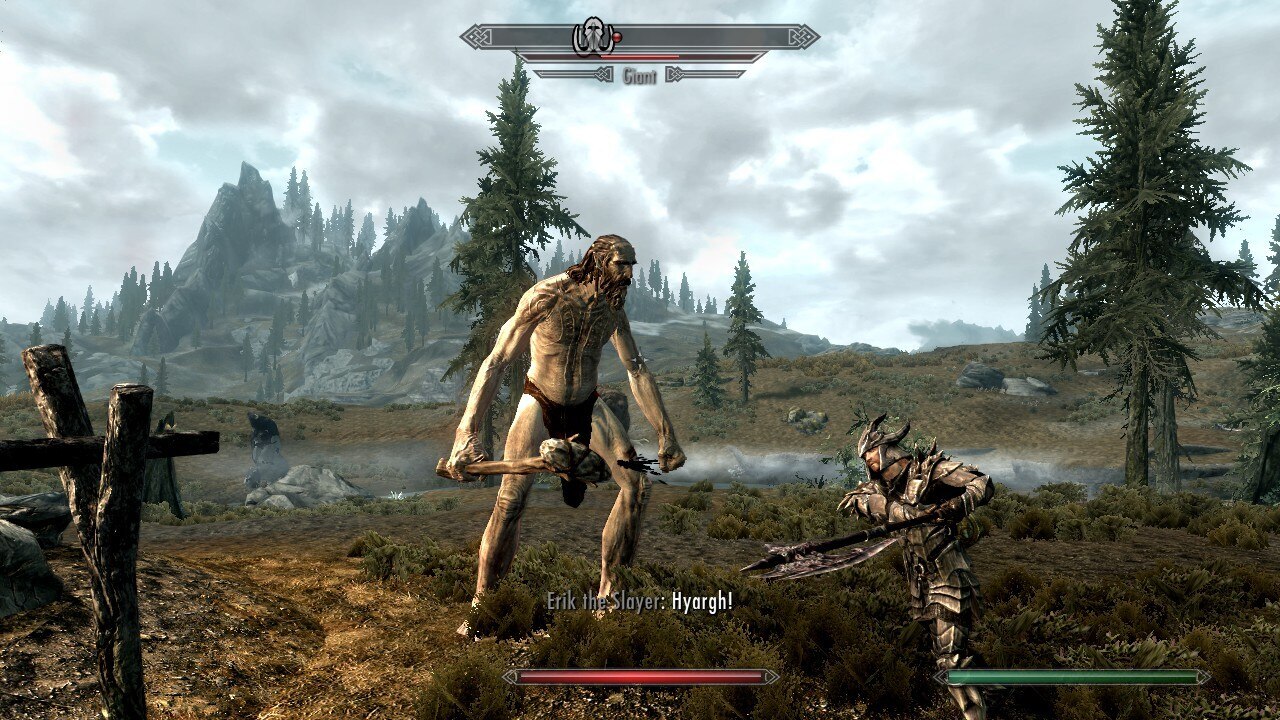 With a defensive-oriented build, he’s one of the most durable companions in the game. And in the late game, durability is more important for your follower than offensive prowess. After all, they won’t deal any damage to your enemies if they’re down for the count.

If you want your Erik to be completely defensive, give him a one-handed weapon and a shield to take advantage of his high Block skill. Remember to give him some pre-made health and stamina potions as well, since he can use them (He cannot use any potions you create, however).

Despite preferring Light Armor, Erik possesses zero talent for stealth. With a Sneak skill that stays at 15, Erik will give away your position constantly. So, if you prefer lurking in the shadows and taking out enemies from a distance, Erik isn’t your best option.

Personality also matters to many players when they pick a companion. And it’s safe to say that Erik ranks highly in that category as well. As someone finally living out his dreams as an adventurer, Erik is never gloomy. And unlike some companions (I’m looking at you, Marcurio), he doesn’t give you lip when you ask to swap gear with him. 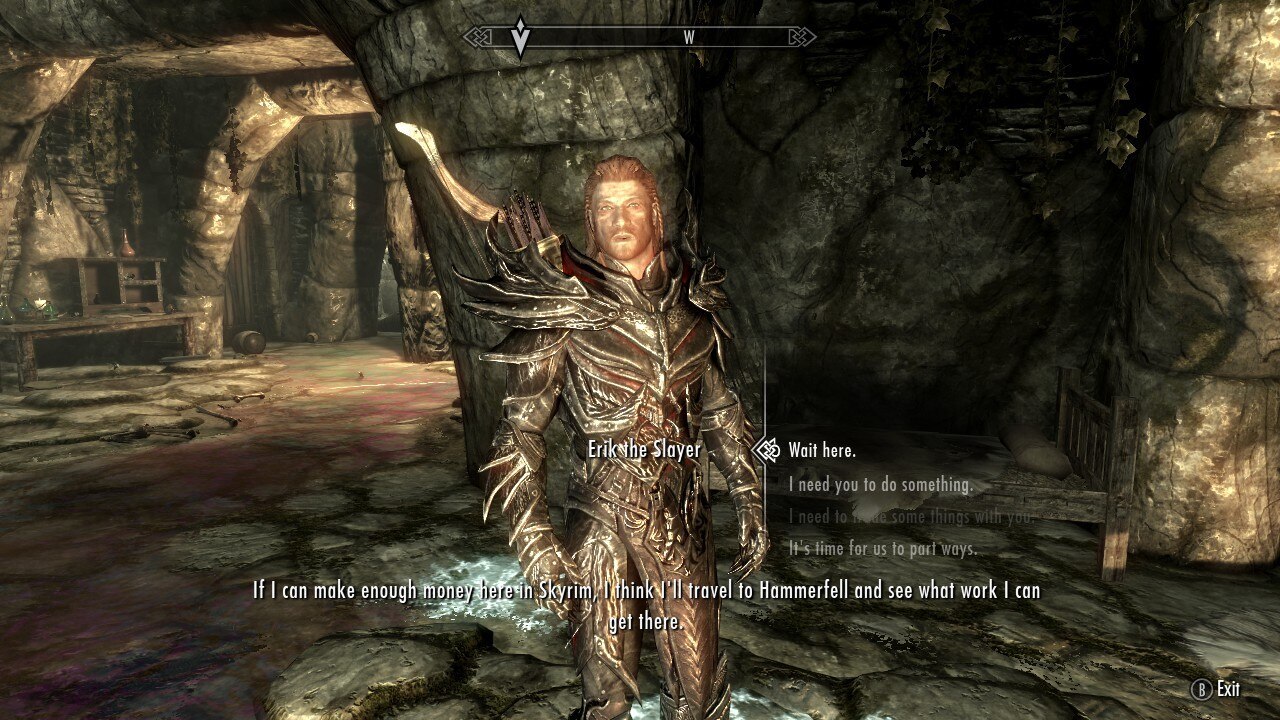 Erik is also one of the more talkative companions in Skyrim. One of my biggest criticisms of Skyrim companions is that they’re borderline mute (It never gets old how Lydia constantly yawns while on adventures with me), which makes them seem devoid of personality. Sure, the fresh-faced adventurer isn’t a groundbreaking character, but it’s something.

What Armor Should I Give Erik in the Early Game? 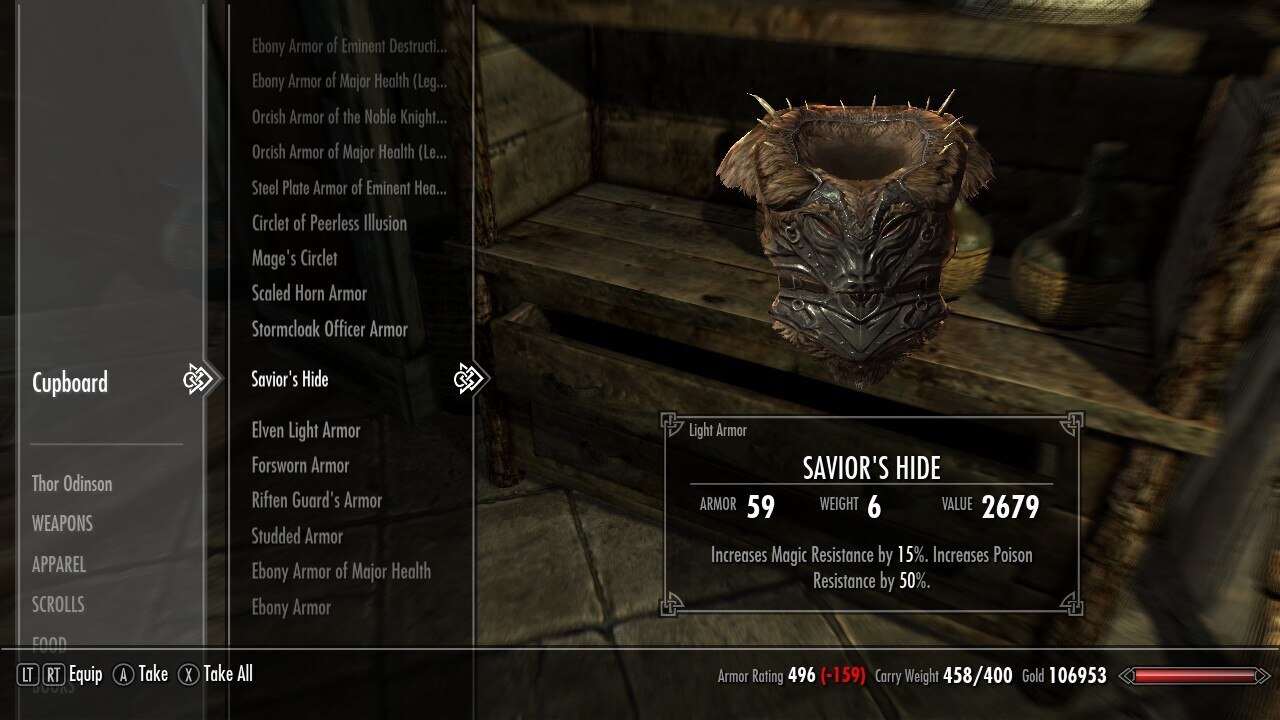 If you’ve completed Ill Met By Moonlight and obtained the Savior’s Hide, that’s a good starting chest piece for Erik.

By completing the Forsworn Conspiracy and No One Escapes From Cidhna Mine, you can get a full Light Armor set in the Armor of the Gods. Most of the effects don’t lend to Erik’s skill preferences, but it’s a start. 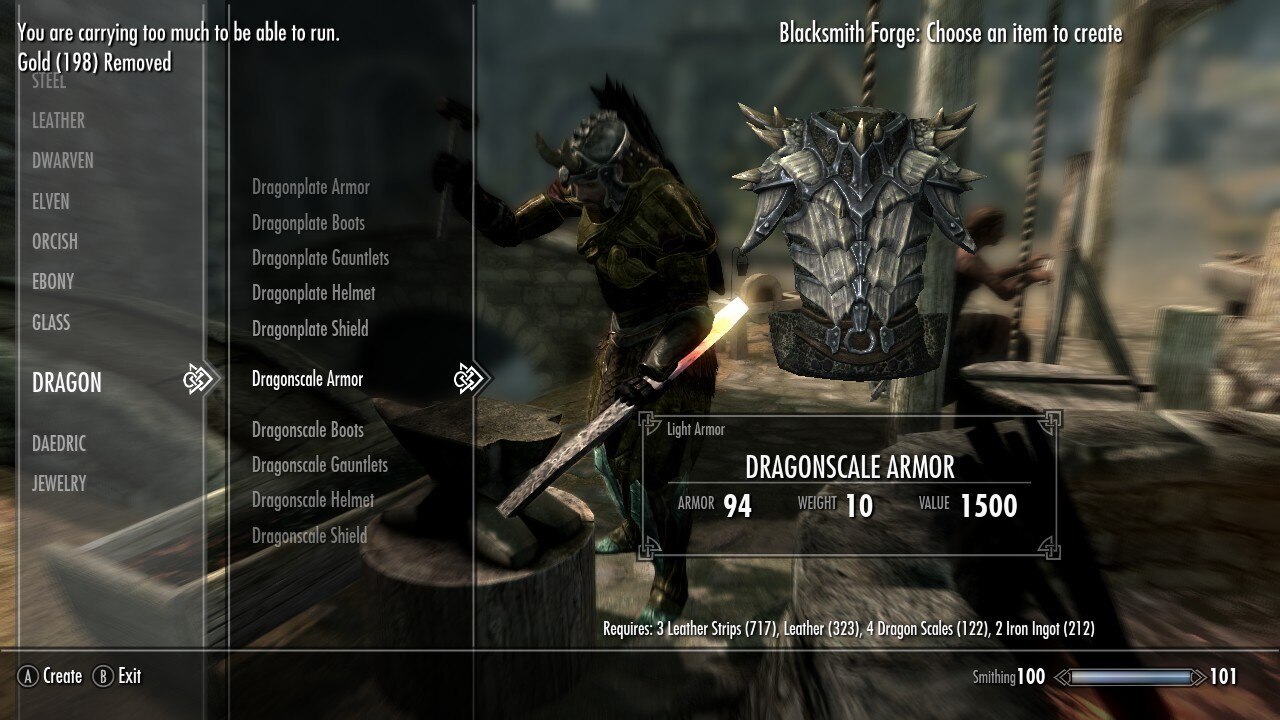 Eventually, you’ll want to set him up with a set of Dragonscale armor.

Erik the Slayer is based on the Internet user Immok the Slayer. Real name Erik West, Immok was an avid Elder Scrolls fan, and Bethesda invited him to their studios during Skyrim’s development process. Unfortunately, Erik died of cancer in May of 2011, six months before the release of Skyrim. To honor his memory, Bethesda immortalized him as Erik the Slayer.

Question: Can I make Erik a steward?

Answer: Yes, Erik can become a steward, though his dialogue sometimes gets buggy if you go down this route.

Question: Can I make Erik a member of the Blades?

Answer: You can, but I feel like this contradicts the character’s personality. Erik wanted to be an adventurer all his life, so I doubt he wants to shack up with fanatical dragon slayers for the rest of his days.

Qustion: Does Erik have any magical aptitude?

Answer: He does not. Erik and most of the people in Rorikstead despise magic.

So, is Erik the Slayer a good companion? Absolutely. In the early game, you may prefer someone like Lydia over Erik. But at max level, Erik outperforms followers with higher level caps than him. Even 11 years and many new companions later, Erik the Slayer is a top-five companion in Skyrim. Not bad for a farm boy from Rorikstead village.

I wish Bethesda had taken a page for Obsidian’s playbook from New Vegas and given more followers personal quests in Skyrim. Imagine if Erik wants to make his dad proud by bringing a dragon’s skull to hang in his father’s inn, and he asks you for help on the hunt. Just a little something extra to flesh him out even more.

But all in all, I’m pretty satisfied with Erik. His abundance of ambient dialogue makes him far more entertaining than 99% of followers in the game, and he’s a powerhouse to boot.