Eoin Black
At the bright young age of nine years old, Eoin played his first-ever video game. Despite investing serious time into Esports, Eoin always found himself returning to narrative-driven games, vowing to one day make it as a narrative designer himself.His love for the Elder Scrolls have been a constant inspiration, and if he can come up with a world half as rich and expansive, he will consider it a successful venture.

Skyrim’s Dragonborn DLC has us venturing to the island of Solstheim. This is a rare example of us returning to a location in a mainline TES game as the island also hosted Morrowind’s Bloodmoon DLC. Like the island itself, Bloodskal Barrow is also present in both games, although time has resulted in it being lost between TES III and V.

Functionally, Bloodskal Barrow is just like any other Nordic ruins you might have explored throughout Skyrim. While it starts out as a mine, you’ll soon find yourself navigating catacombs and fighting Dragur on your way to the word wall at the end of the dungeon.

The entirety of Bloodskal Barrow is connected to The Final Descent quest, so you’ll need to go through that quest in order to access it.

I’ve put together a short Bloodskal Barrow guide walking you through how to navigate the dungeon, what enemies you’ll be facing, as well as what notable loot you should on the lookout for. 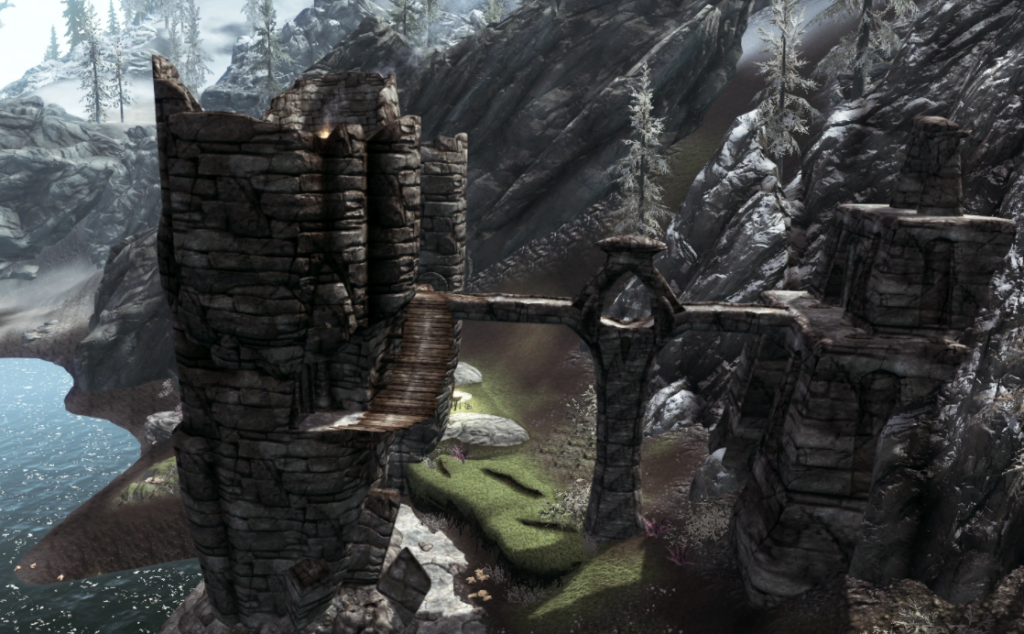 Bloodskal Barrow has appeared in two Elder Scrolls games, granted in the same location each time. The dungeon, along with its signature Bloodskal Blade, is present in the Bloodmoon DLC in TES III: Morrowind, and the Dragonborn DLC for TES V: Skyrim. Both of these DLCs take place on the island of Solstheim.

The barrow once belonged to the Bloodskal clan, although it’s unclear what Zahkriisos’ connection to them is. It was discovered by miners in Raven Rock Mine after seemingly being lost post the Nerevarine taking, and returning the Bloodskal Blade from it.

The East Empire Company sent explorers to plunder the barrow after its discovery. Unfortunately, those explorers were killed by Draugr after recovering the Bloodskal Blade. The EEC covered up these deaths by claiming they were killed in a mining accident.

The barrow itself, for the most part, isn’t too different from the other Draugr-infested tombs you can find around Solstheim and Skyrim. However, it does have one particular unique setpiece in the form of its door. The door is unlocked by using the unique ranged attack of the Bloodskal Blade and features a kind of cylindrical lock that reacts to the blade’s energy.

To gain access to Bloodskal Barrow, you’ll need to explore Raven Rock Mine as a part of The Final Descent quest. To get that quest, you need to head to the mine and speak to a man named Crescius Caerellius. He’s actually the great-grandson of an NPC that was present on Solstheim in TES III.

Speak with Crescius and he’ll give you a little bit of backstory, as well as a request to venture into Raven Rock Mine to retrieve his great grandfather’s journal.

The layout of Raven Rock Mine is fairly straightforward. Make your way through it, and you’ll eventually come to a drop into a cavern. Take this drop, and you’ll see the skeletal remains of Crescius’ old grandad in front of you. Loot the Bloodskal Sword and journal from the remains. Then, read the journal and use the sword to open up the big door in front of you.

Continue through the door and you’ll eventually come to the Bloodskal Barrow boss room. Open the chest in the center of the room, and a Dragon Priest named Zahkriisos will spawn in. Kill the priest and interact with the word wall at the back of the room. Then, on the way out, interact with the Black Book. This marks the end of Bloodskal Barrow. Although, you do need to head back to Crescius in Raven Rock to finish The Final Descent.

Crescius and his wife can be found at the entrance to Raven Rock Mine. The two of them are having an argument when you enter. Apparently, Crescius has been exploring the mine himself. Given that he’s an old man, his wife is concerned that this will end up in him getting killed. So Crescius, being a good husband, hires you to do the hard work instead.

He’ll tell you a story about his great grandfather Gratian Caerellius. Gratian was an explorer in the employ of the East Empire Company in the Third Era. The company sent him to explore Bloodskal Barrow after it was uncovered.

After his death at the hands of Draugr, the EEC claimed that he died in an accident and covered the whole ordeal up. Crescius found out about this and wants you to get him proof. So, he’ll ask you to delve into Raven Rock Mine to uncover a journal from Gratian’s remains. 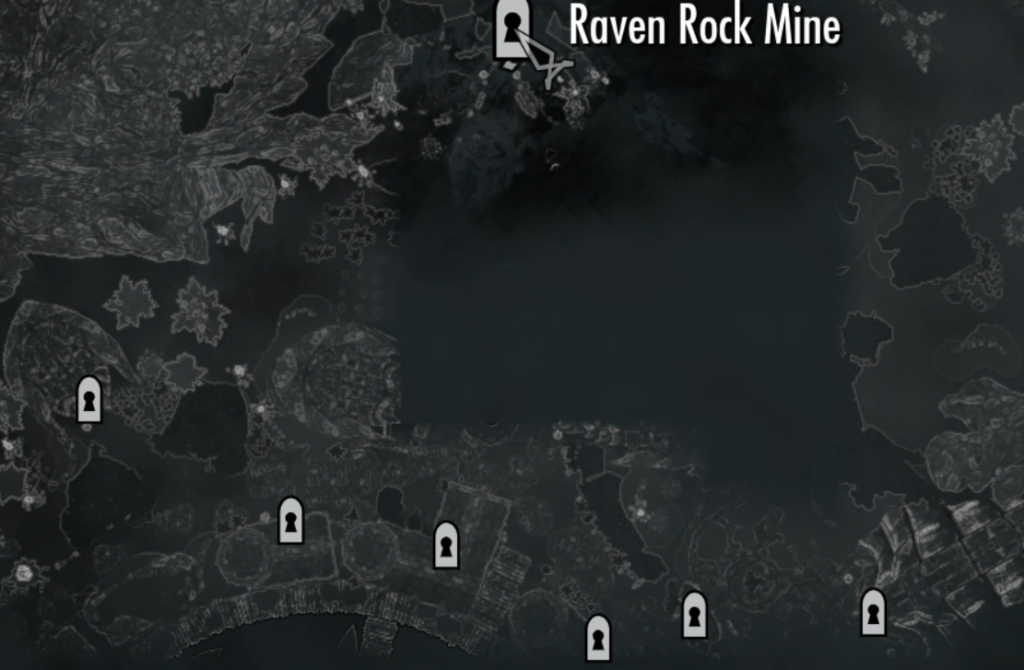 Once you’re finished asking Crescius questions, you can dive into Raven Rock Mine. The path in the mine is fairly straightforward. You’ll be going down through a series of scaffolding and caves. There are a few spiders and Skeevers, but nothing that’s worth worrying about.

Eventually, you’ll get to a boarded-up mine shaft. You can break through these boards, at which point you’ll discover Bloodskal Barrow and the fact that the miners evidently broke through into it.

Bloodskal Barrow itself starts from here on. You’ll be dealing with a lot of leveled Draugr as you enter the barrow, so make sure you come prepared. The barrow is also littered with traps, both of the mechanical and Soul Gem variety, so take it slow as you work your way through the barrow’s various rooms and corridors.

Eventually, you’ll come to a drop into a cavern. This serves as a point of no return for Bloodskal Barrow. After falling, you won’t be able to leave until you defeat Zahkriisos, so set up a save here if you’re worried about being soft locked.

After the drop, you’ll see a large door in front of you. In front of the door, you’ll find the skeletal remains of Gratian. On his remains, you’ll find his journal that Crescius wants you to recover, as well as the Bloodskal Blade. Loot both.

You can read Gratian’s journal if you want. It details his final days, as well as his notes on the door itself. You’ll find sketches that make what you’re meant to do next fairly obvious. Equip the Bloodskal Blade and do a power attack with it. It’ll shoot out a beam of red energy. If you power attack to the side, the beam will be horizontal. If you move forward and power attack, it’ll be vertical.

On the door, you’ll see two glowing red lines, one on each side. Hitting one of them with a horizontal power attack will cause it to disappear. Do this for both, and another set will spawn in, this time vertically. Repeat the process for this set, and another set, as well as one final line, and the door will open. 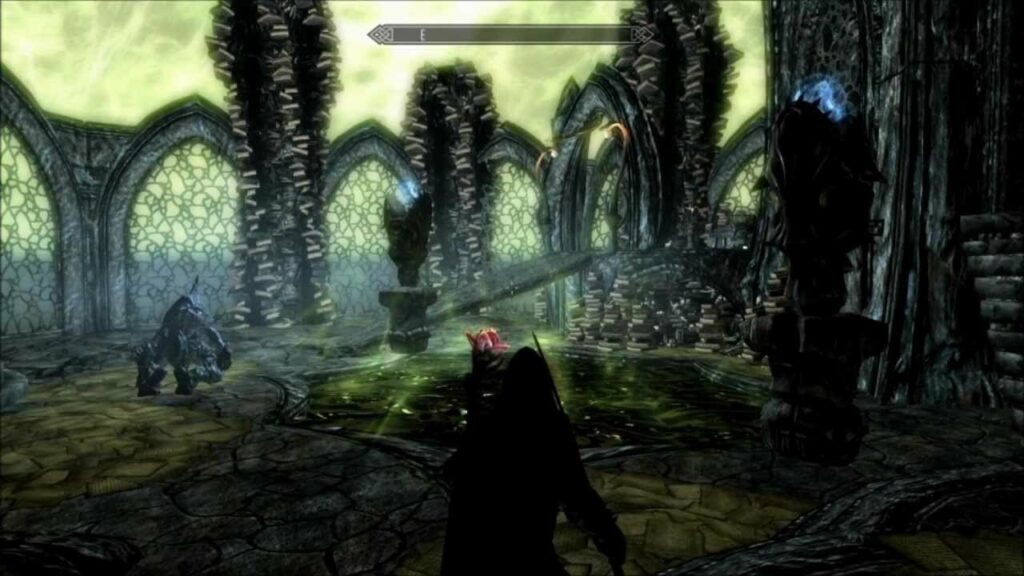 Before you enter the final boss room, you’ll have to get through the corridor of death. There’ll be a ton of traps, as well as a bunch of swinging axes. If I were you, I’d throw down a fresh save before you attempt to run through it. If you have it, use the slow-time shout, too.

After that, you’ll come across a half-flooded room with a word wall in the back of it. In the center of the room, you’ll see a loot chest. The chest itself is a trap, which is fairly obvious when you realize it only has two gold pieces in it. Once you open it, Zahkriisos will spawn in.

While Zahkriisos is a difficult opponent, he is fair. His level is set according to your level, so it’ll be an even fight regardless of your progression in the game. He has some seriously powerful spells, though, so if you have any resist magic potions or armor, they’ll work a treat here.

It’s possible to cheese the fight by hiding on the outskirts of the boss room and hitting Zahkriisos with ranged attacks, which you have now thanks to the Bloodskal Blade. The blade’s ranged attack doesn’t do much damage, but it will get the job done if all else fails.

Once you kill Zahkriisos, absorb the Dragon Aspect shout from the word wall. This marks the end of Bloodskal Barrow.

Before you leave, though, you’ll want to pick up the Black Book that’s in the dungeon. It’s impossible to miss, given that it’s on a pedestal in front of the stairs you need to take to the exit. The book itself is the Winds of Change. You can complete it now, or leave Apocrypha and do it later, it doesn’t matter.

Once you’re out of the barrow, you can return to Crescius in Raven Rock to complete The Final Descent.

Black Book: The Winds of Change 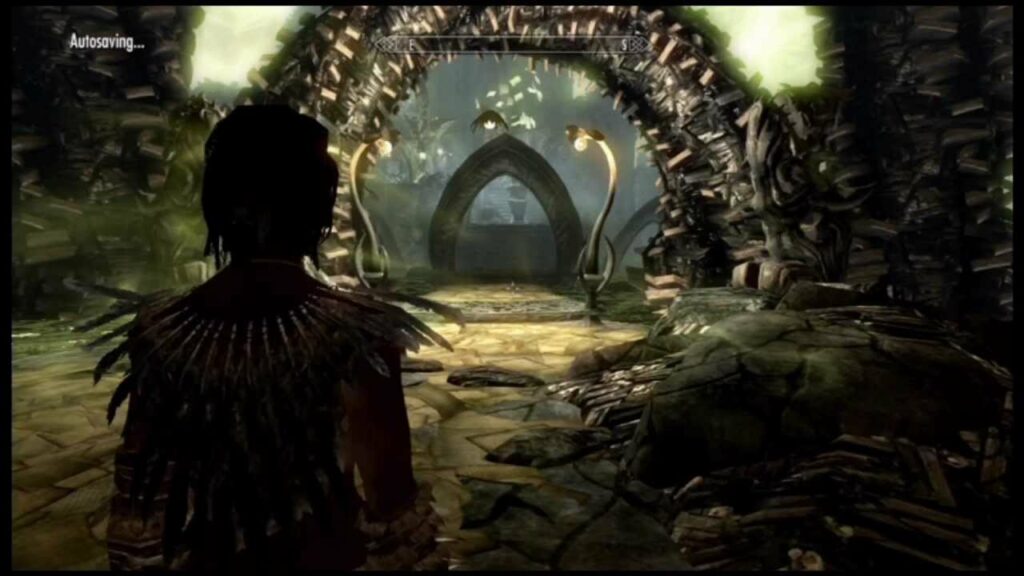 The Black Book that is stored at the end of Bloodskal Barrow is the Winds of Change. When you finish this section of Apocrypha, you’ll have the option to take one of three different buffs:

Companion’s Insight: Your attacks, shouts, and Destruction spells no longer deal damage to your companions.

Lover’s Insight: You do 10% more damage against and get 10% better prices from NPCs of the opposite sex.

The word wall found at the end of Bloodskal Barrow is for the Dragon Aspect shout. The other two Dragon Aspect walls are found in the Temple of Miraak and Apocrypha. 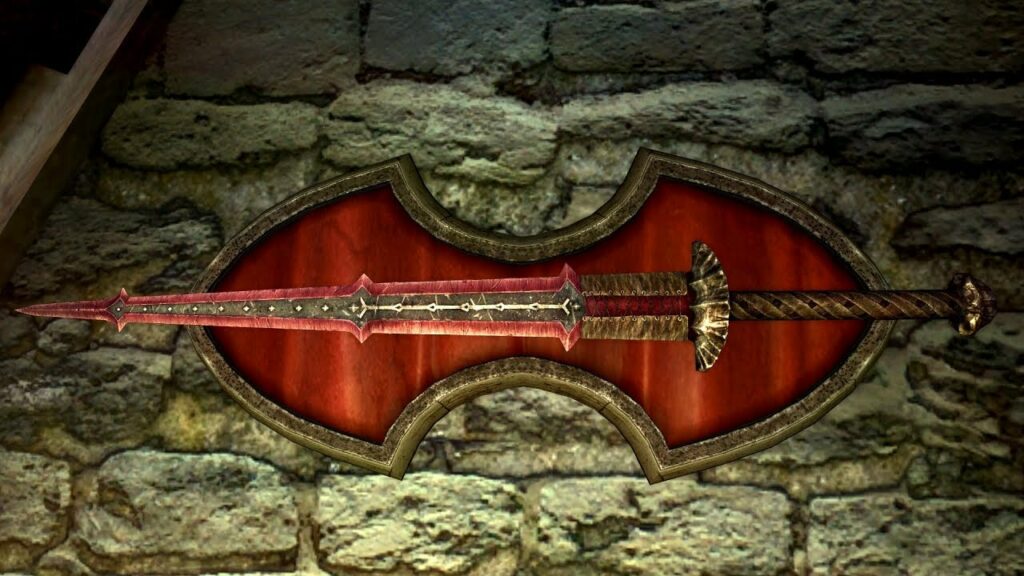 The big main attraction of Bloodskal Barrow is the Bloodskal Blade. This blade is a unique two-handed greatsword that lets you shoot beams of energy from it. When you power attack with it, a beam will blast in the direction of your swing, damaging and staggering any target hit by it.  This makes it the only melee weapon in Skyrim capable of ranged attacks.

Question: How do you open the door in Bloodskal Barrow?

Answer: To open the door in Bloodskal Barrow, you need to use the Bloodskal Blade. When you power attack with the blade, it sends out a ranged energy blast. You use this blast to unlock the glowing red lines on the door. Once you hit all of the lines, the door will open.

Question: Where can I find Bloodskal Barrow?

Answer: Bloodskal Barrow is accessed through Raven Rock Mine. The barrow itself on the map is located just north of Raven Rock. It’s pretty hard to miss it.

Question: Is there a word of power in Bloodskal Barrow?

Answer: Yes, the word wall at the end of Bloodskal Barrow contains one of the words of the Dragon Aspect shout. The other two word walls are found during the Dragonborn main questline in the Temple of Miraak and Apocrypha.

That pretty much does it for this Bloodskal Barrow guide. There are a few minor details I’ve left out, like the fact that the barrow has two high-level locked chests inside of it, but the last thing you need is a 10,000-word essay outlining every single step you need to take in order to navigate the dungeon. It’s pretty much just like any other ruin, so treat it as such.

Regardless of how you feel about the Bloodskal Blade, or dungeon crawling in general, you’ll need to complete Bloodskal Barrow during your Dragonborn playthrough. Not only is it home to one of three Dragon Aspect word walls, but it’s also got one of the Black Books, so it’s well worth the 30 or so minutes it should take you to complete.