Ebony Armor is one of the most iconic armor sets in the Elder Scrolls. From the infamous Gaenor in Morrowind to the Ebony Warrior in Skyrim, foes clad in it make for difficult opponents.

As one of the best Heavy Armor sets in every game it has appeared in, you’ll do well to get your hands on some as quickly as possible. But Skyrim isn’t Morrowind, so don’t expect to stumble across someone in Ebony Armor at level 3.

Thanks to the leveling system, you progress through weapons and armor through a tier system, and ebony is a top-five armor set in terms of armor rating and top-three in the Smithing skill perk tree. Ebony weapons or weapons that improve with ebony ingots also rank in the top five of every weapon type. You won’t come across ebony equipment naturally for a long time.

Unless you spend a lot of time at the blacksmith’s forge and make some yourself, that is. And that, my friends, is entirely doable at a low level. All it takes is getting your hands on some ebony ingots. How do I go about doing that, I hear you ask? Good question. Allow me to fill in the blanks for you and ensure that you never have a shortage of ebony supplies.

What Are Ebony Ingots? 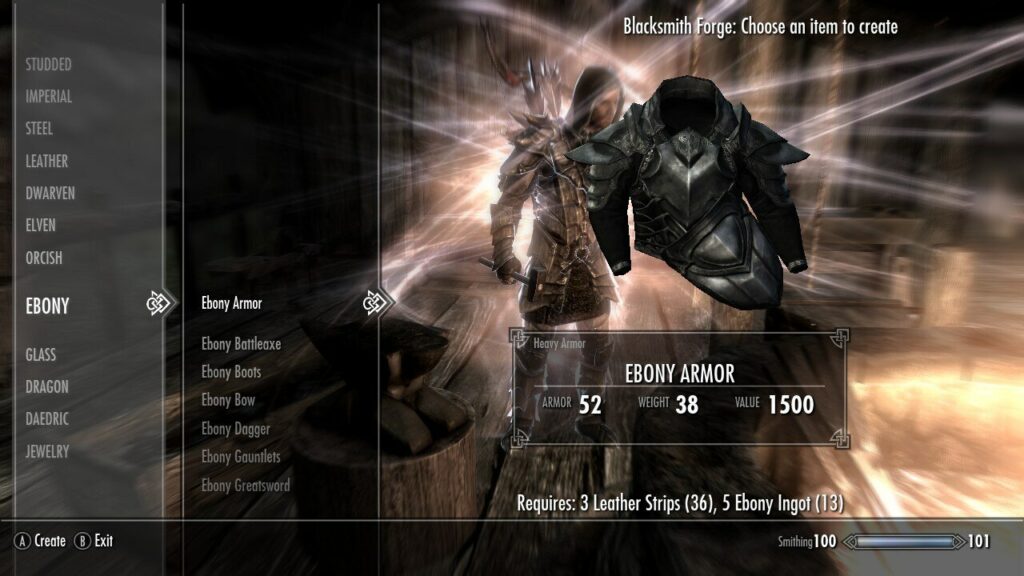 Ebony ingots are also required material for the Atronach Forge to get random enchantment Daedric weapons and armor.

What Are The Best Ways To Get Ebony Ingots?

Once you hit level 27, blacksmiths will start stocking ebony ingots in their inventory. They don’t always have them but appear frequently enough and in high supply (Typically 6-10). I make a habit of stopping by the local blacksmith trading my loot for ebony ingots. If you do this for a while, you’ll have a massive supply of ebony ingots before you know it. 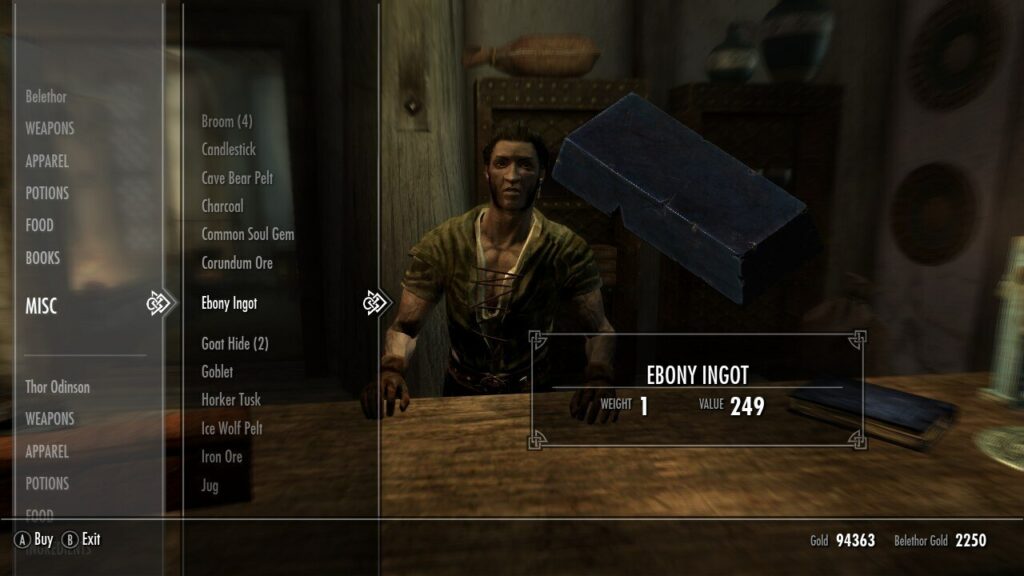 General goods traders have a chance of having ebony ingots in stock at around level 14. However, it’s rare for them to have ebony ingots, and it’s never more than 1-2. Regardless of which kind of merchant you buy them from, you’ll notice that they cost a pretty penny. Purchasing hundreds of ebony ingots is well out of your reach for a while.

But don’t worry, as there’s an even better way to acquire ebony ingots in the early game and for free. It requires a more hands-on approach, but using your hands is what blacksmiths do, am I right? Grab yourself a pickaxe because we have a lot of mining to do.

If you want to acquire a lot of ebony ingots without spending a fortune, the only way to do so is by mining ebony ore and smelting them yourself. Ebony is an exceedingly rare material, however, and few veins exist. Some are so far off the beaten path that they aren’t worth the trouble.

Luckily, there are several locations where you can find a healthy amount of ebony ore, and they’re the only mines you need. What’s critical for you to remember is that mines in Skyrim take 30 in-game days to reset. It’s best to visit these mines are quick as you can so they can start their cooldown timer.

The best place to find ebony ore in Skyrim is the Gloombound Mine in the Orc stronghold of Narzulbur southeast of Windhelm. Unfortunately, since it’s Orc territory, you either need to be an Orc yourself or Blood-Kin to get anywhere near it.

Becoming Blood-Kin to the Orcs is simple enough; All you have to do is complete any miscellaneous quest for any Orc NPC in Skyrim. The easiest way to do this is by speaking with the blacksmith Moth gro-Bagol in Markarth’s Understone Keep. He’s the jarl’s personal blacksmith and needs a Daedra heart to cool his new sword. 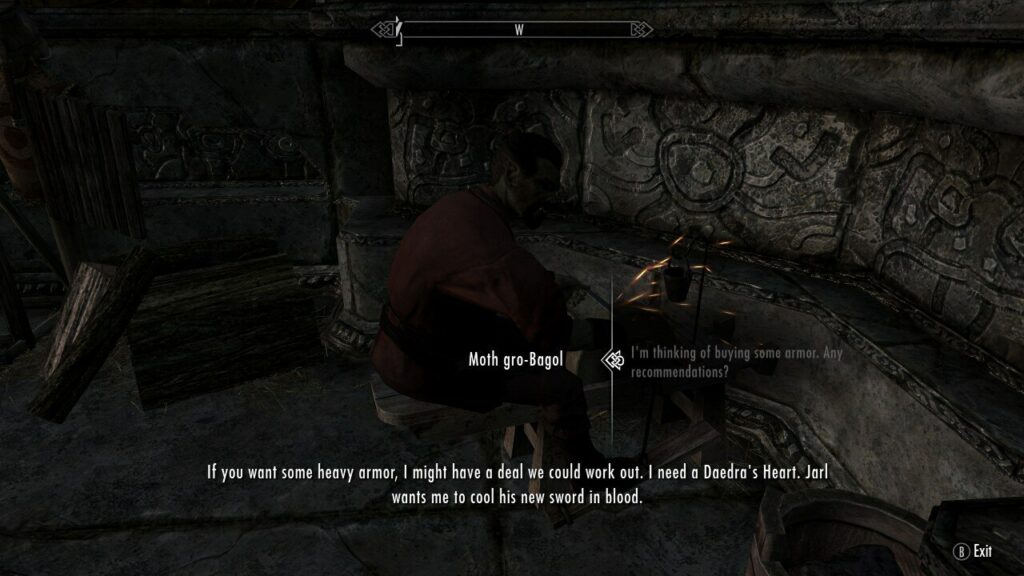 Daedra hearts are one of the rarest items in the game and harder to find than ebony ingots are. Luckily, there’s an easy to get one if you have the gold. 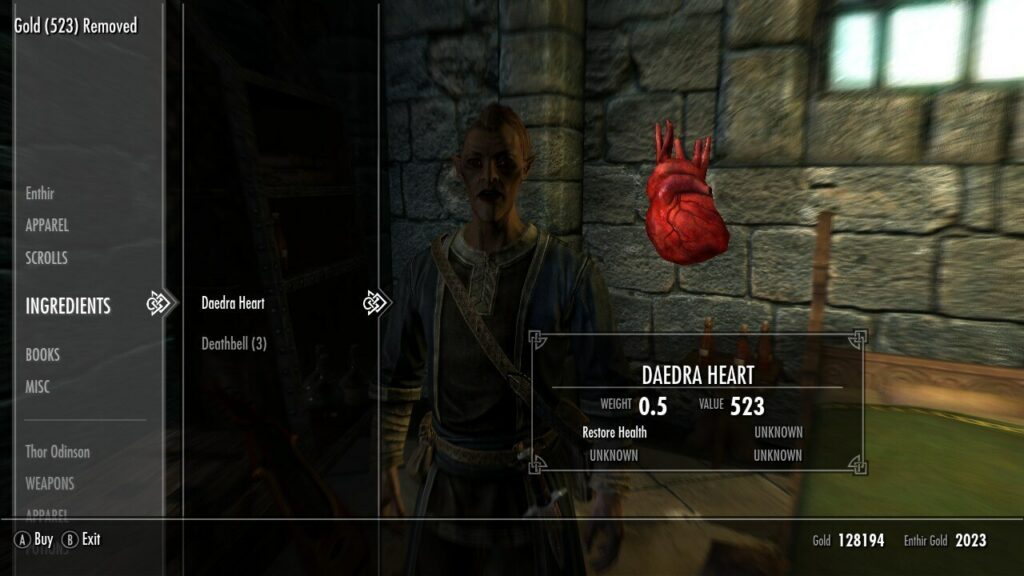 Travel to Winterhold and head up to the Mages College. Pass the test to gain access to the College, then go to the Hall of Attainment. Head up a flight of stairs, and you’ll find a sketchy-looking Wood Elf named Enthir on the second floor. He’s a black market dealer of sorts and stocks Daedra hearts. Buy one and be on your way back to Markarth.

Deliver the heart to Moth, and he will give you a random, leveled piece of armor. He will also name you Blood-Kin, which grants you access to every Orc Stronghold in Skyrim.

Head for Narzulbur and make your way to the Gloombound Mine on the upper east side. There are some pieces of ebony ore in various places around the camp, but not even being Blood-Kin allows you to take them freely. If you have nothing against stealing, then by all means. Just make sure that no one sees you doing the deed.

Head inside Gloombound Mine and get to work on all 16 ebony ore veins inside for a total of 48 ebony ore. Ebony ingots require two ore apiece, so 24 for your efforts. Not bad.

Avoid speaking with the blacksmith outside the mine and choosing the option to sell your ores because he does buy up every piece of ebony ore you have. Alternatively, it can be a great way to get some starter gold, and it’s not like you need ebony gear at level 1. 30 in-game days will go by quickly enough, and the mine will replenish its’ ore veins by then. 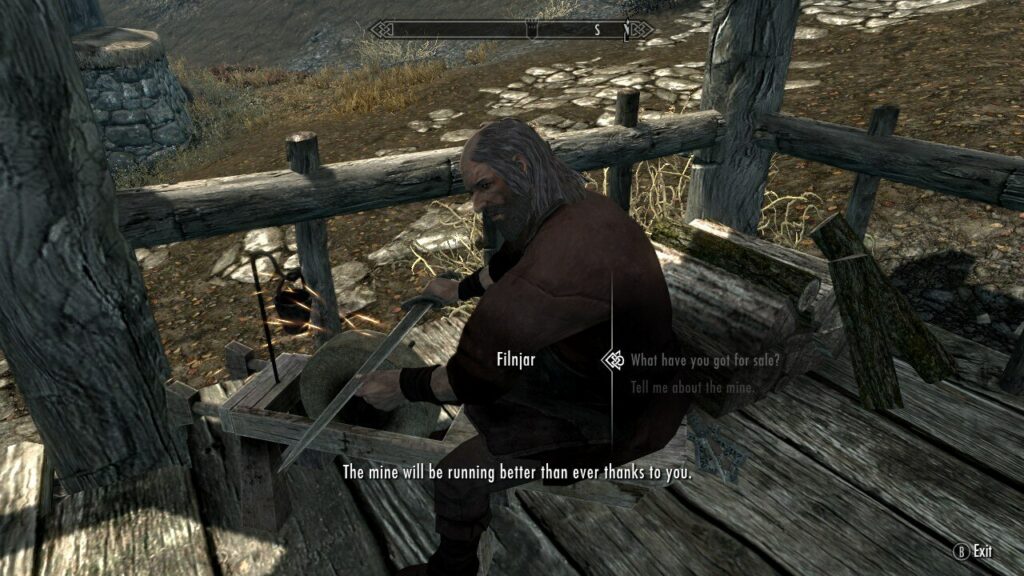 Head for the village Shor’s Stone north of Riften and speak with the blacksmith Filnjar. He will tell you that their mine is temporarily closed due to a frost spider infestation. Offer to clear out the mine for him. 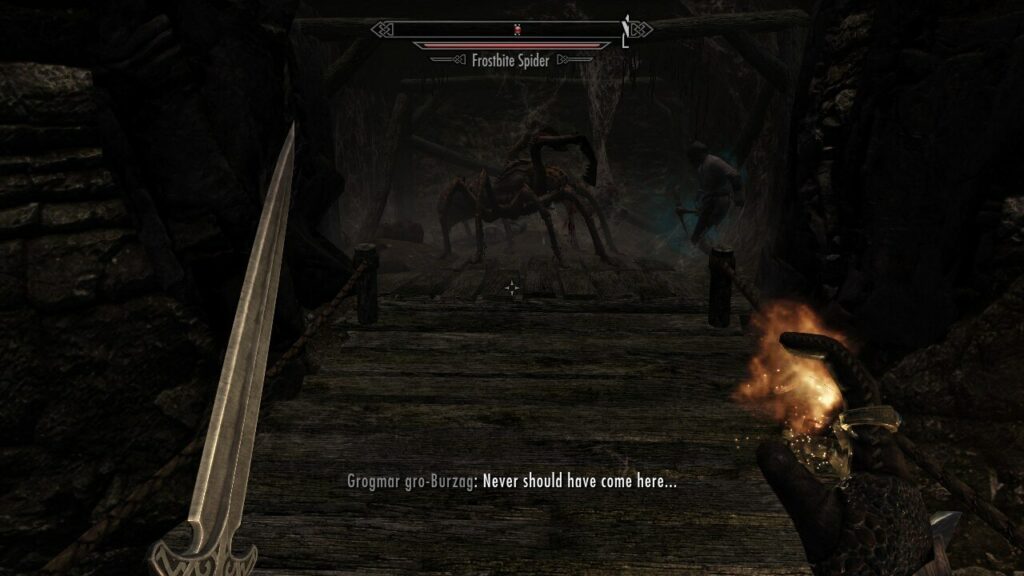 Head inside Redbelly Mine and kill the five frost spiders inside. Even for a low-level player, this is an easy task. Oddly enough, Filnjar refers to Redbelly as an iron mine. He also recently found a quicksilver ore inside. In reality, it’s an ebony mine. After the spiders are all dead, mine the three ebony ore veins inside. 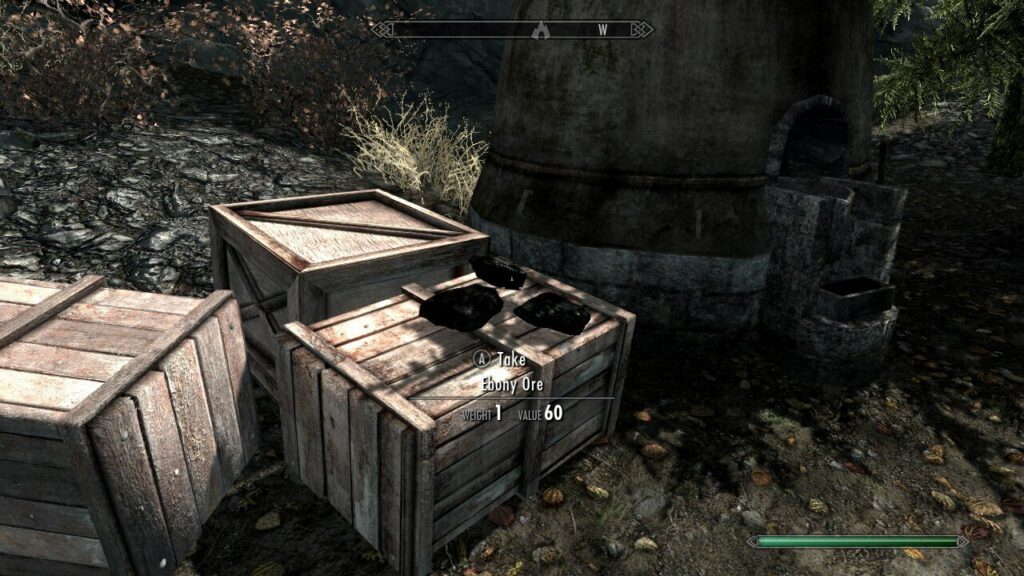 Return to Filnjar, and he will thank you and reward you with a leveled amount of gold. You’re now friends with the people of Shor’s Stone and can freely take the three ebony ore near the smelter. That’s 12 pieces of ebony ore for not a lot of work. The ore by the smelter also respawns far quicker than the ore veins inside the mine, so come here often.

After completing the quest associated with Bloodskal Barrow, you will gain access to nine ebony ore veins. I prioritized locations that require little to no combat so newer players will have an easier time. But once you’re confident in your combat abilities, be sure to visit Raven Rock mine.

Remember how I mentioned that some locations with ebony ore veins are more trouble than they’re worth? Welcome to Blackreach.

Blackreach is a quest location for Elder Knowledge (The main quest) and Discerning the Transmundane ( Daedric quest for Hermaeus Mora). You can find Blackreach beneath the Tower of Mzark but cannot access it without initiating one of the above quests.

While you’re down here, you can mine six ebony ore veins. However, they’re scattered apart from one another, meaning they’re in a place that’s a chore to get to, and they’re a chore to find. Do you really want to come here every 30 days when Gloombound Mine exists?

Throat of the World

At the very top of the Throat of the World, you can find two ebony ore veins and the notched pickaxe. However, this location is not great for new players since you can run into some dangerous enemies on the way there. You cannot fast-travel to the mining spot and have to climb the mountain every single time. All this for six ebony ore? Not worth it, in my opinion. Do it once for the unique notched pickaxe, then call it a day.

That’s all the most notable locations of ebony ore veins in Skyrim. Let’s talk about the benefits.

A minimum of 80 Smithing is necessary for this, but you also need to have high levels in Alchemy and Enchanting for Fortify Smithing gear and potions.

When you have all of that in order, you can make a ton of profit by smithing or buying ebony weapons and armor, tempering them, and re-selling them. 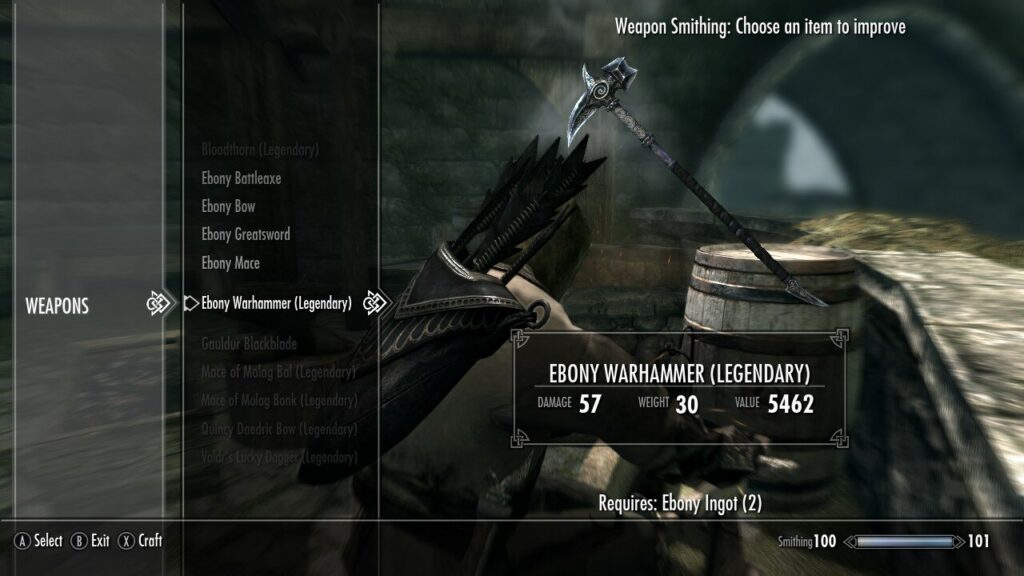 It’s one of the better ways to make money in Skyrim, and you can do it to level your Smithing skill for free. Buy all the smithing supplies from a blacksmith and re-sell them some ebony equipment. You get some experience, and you get all your money back. Win-win.

How Long Should I Mine Ebony Ore To Make Ingots?

Some may disagree with me on this, but I find mining ore something I’d recommend only for the early and mid-game of Skyrim. Once your Dragonborn is rich, it’s easier and faster to do a merchant tour around Skyrim, buying up all the ebony ingots from blacksmiths in town. You’ll get way more materials (Ebony or otherwise) doing this than you would from mining every ebony ore vein in the game.

There’s no Mining skill or Level 99 Mining Cape in Skyrim. Feel free to retire from the activity without worry.

Question: Is there any way to speed up mining?

Answer: Instead of going through the mining animation, you can wield a pickaxe and attack the ore vein instead. However, the difference in mining speed is pretty minimal.

Question: I’m mining an ore vein but not getting any ebony ore! Why is that?

Answer: Are there any NPC miners in the mine? If so, you will regularly have to mine an ore vein twice. You can force an NPC off an ore vein, but when you mine it yourself, you won’t get anything on the first attempt. Exit out of the mining animation, then do it again, and you’ll be able to get the ore.

Question: Is ebony a material in real life?

Answer: Unfortunately no, so no cosplaying as the Ebony Warrior. At least not faithfully. Ebony seems to be the Elder Scrolls’ version of obsidian.

And there you have it, folks. That’s all you need to know about ebony ingots and ores in Skyrim. That wasn’t so bad, was it?

I admittedly think that ebony armor in Skyrim is far inferior to what it was in Morrowind. The black and gold armor in Tamriel looks incredible (And totally doesn’t remind me of Black gold-trimmed armor from Runescape. Definitely not.), but Skyrim’s version looks pretty cool too. It’s hard to make a jet-black set of armor in any game that doesn’t look good.

The weapons look fantastic too. And most importantly of all, it’s top-tier gear that will serve you well for dozens of hours while exploring Skyrim.