The release of Elder Scrolls Online‘s High Isle expansion kicked off its year-long narrative event known as the Legacy of the Bretons. That storyline is continued and ultimately concluded in the Firesong DLC. The DLC also shows players more of the Systeres Archipelago by opening up the two small islands of Galen and Y’ffelon. So, here is everything there is to know about the Firesong DLC.

Post-launch content in Elder Scrolls Online is divided into two categories. The first are expansions, like High Isle, that add large zones with new dungeons, a trial, and typically a new skill line or mechanic for players to experiment with.

DLCs, on the other hand, are more minor releases that add smaller areas and less content. These pieces of content usually include new armor sets, their quest line and side quests, and public encounters like world events and world bosses for players to team up and fight.

In the case of Firesong, it continues the storyline introduced in High Isle, allowing players to save the Systeres Archipelago ultimately. It also includes new public content, armor sets, mythic items, and even a new deck for the Tales of Tribute card game. To start the DLC, players who own it, either by purchasing it with crowns or subscribing to ESO Plus, need to go to their collections and accept the Sojourn of the Druid King quest.

After the High Isle expansion saw players stopping a terrorist-like group of knights known as the Ascendant Order, Firesong saw players facing a new threat to the archipelago. This threat is none other than the titular Firesong Druids.

A clan of fiercely isolationist druids, the Firesong are a group of Bretons that worship a colossal volcano known as Mount Firesong. Meanwhile, a group of sea elf pirates also terrorizes the city of Vastyr and the more peaceful enclaves of druids from both islands.

As players progress through the story to help repel both sources of aggravation, they get an exciting peek at the history and lives of native Bretons. The Systeres Archipelago has never been seen in another Elder Scrolls game, so exploring it and learning about the druids that call it home is very interesting.

The story also peels back the curtain on the history of the Bretons and introduces numerous new characters for players to interact with. The map introduced in Firesong also feels more alive than any other region in ESO. Players can interact with more NPCs and creatures, there are more interactions and hidden details to notice, and there are even achievements centered around players fully exploring what the region offers.

One unique addition introduced by High Isle was the new competitive card game Tales of Tribute. The card game was a big success among ESO players, so it makes sense that Firesong added a new deck to the fold. The deck has to be assembled by players, but once it’s built, it can be used in any Tales of Tribute game to create new synergies.

To unlock The Druid King deck, players must collect five fragments from the new activities in Firesong. Each of the fragments and how to get them is described below:

When the Druid King deck is active in a game of Tales of Tribute, players can also interact with the Druid King himself as a patron. Doing so costs two Power and is interesting because it can be used in combos with other cards from the deck.

The Druid King deck has an exciting playstyle because of its ability to give players benefits by adding cards to their cooldown pile. This emphasizes playing cards in the correct order. Otherwise, players will find their turns passing with little to no impact, especially in the late game.

A similar effect can also be achieved with the Ansei Franding Hundar deck, although doing so trades consistency for more flexibility in your play.

Firesong also includes two new World Bosses. These are massive and unique boss fights intended for groups of multiple players to team up and tackle them. The location of both world bosses and how to beat them are below. 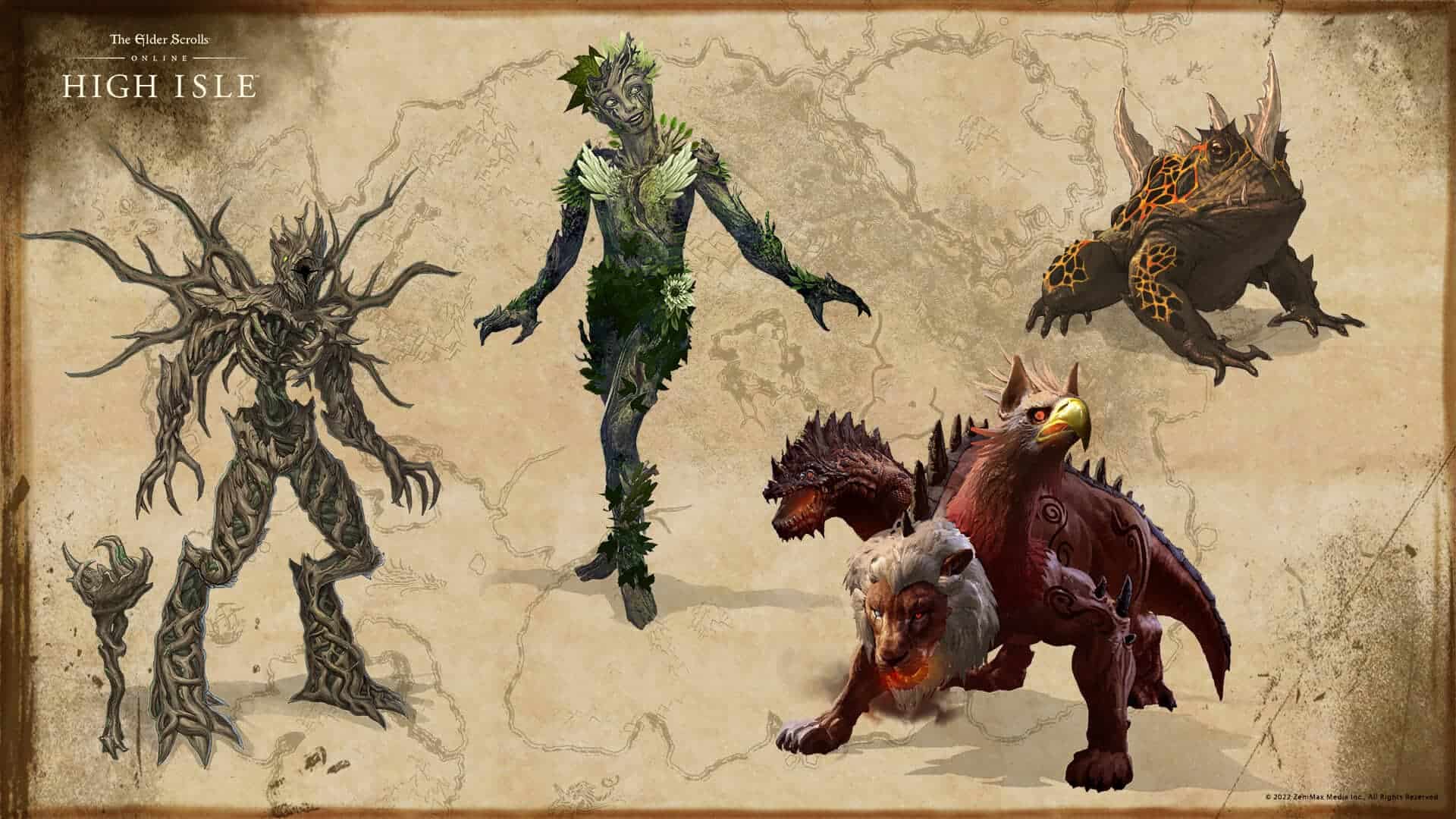 Grove of the Chimera

The easiest way to enter the Grove of the Chimera is by traveling to the Embervine Wayshrine and traveling southwest. When you first enter the grove, the world boss, the Endling, will sleep inside a magical bubble shield. Players must kill three creatures and some Firesong druids in the area to start the fight.

The Endling is a massive Chimera made up of a lion, goat, dragon, and snake. The most important part of the fight is paying attention to its large area of effect attacks. These can quickly kill a player caught off guard, which makes using ranged attacks a far better approach than using melee weapons.

Valley of the Watcher

The Valley of the Watcher is home to the Timbershade world boss. To reach it, travel to the Trappers Peak Wayshrine and travel to the south. Timershade is a corrupted forest spirit that abandoned its purpose of defending nature against any who would harm it.

When you first arrive at the Valley of the Watcher, you’ll find Timbershade protected by a Spriggan channeling a protective field around him. Once you kill the Guardian Spriggan, Timbershade will be released, and the fight will begin in earnest.

Timbershade is highly mobile during the fight. He jumps around the arena, summons beasts to help him, and uses poison to its full potential. During the battle, he will summon more Guardian Spriggans to channel a shield. When this happens, the arena is also flooded with poison, requiring players to kill the Spriggans as fast as possible to avoid being worn down.

Firesong also adds two new delves for players to complete, both on the more oversized island of Galen. Delves are effectively short dungeons that players can find in the open world and enter. They are not instanced, so multiple players can enter the delve simultaneously and run into one another without having to be in a group or send invites to one another. Each delve comes with its quest, multiple bosses, and a skyshard.

The Embervine delve is a system of caves that have been overtaken by nature and is filled with steams of lava. It is filled with Shalks, Firesong Druids, and Magma Frogs for players to deal with throughout its knotted layout.

Embervine has only one boss, Druid Rerlas and Traux the Ancient. The fight is exciting because Traux is a massive Magma Frog that swallows Druid Rerlas whole at the start of the battle. Traux uses a lot of poison, jump attacks, and ranged area-of-effect attacks to try and catch the player off guard.

Once the player kills Traux, Druid Rerlas emerges from inside him and continues the fight. He uses a flame staff to keep the player at range and summon familiars. The best way to approach the battle is to focus on the familiars and deal damage to Rerlas when he is alone.

Faun’s Thicket is a unique delve for ESO because it is not a web of interconnected paths and chambers. It is just a small open area. It is filled with natural enemies like Wasps, Spriggans, and various beasts. The boss of the delve is a massive bear-like creature called a Ursauk named Bahadur.

The fight against Bahltur is relatively straightforward. Bahadur hits extremely hard with melee attacks, jumps, and area-of-effect attacks that afflict players with fear, forcing them to run away from him.

Firesong also adds six new armor sets to the game. Armor sets play a massive role in the end game of Elder Scrolls Online, as equipping multiple pieces from the exact location gives buffs a great way to increase their character’s abilities. In Firesong, three new armor sets are found by drops during quests and world events, while three are only available by crafting them at specific stations spread across the region.

Bastion of the Draoife

Claw of the Forest Wraith

Firesong also includes three mythic items for players to hunt down. Each imaginary item counts as an item set all by itself. These items are made by finding multiple antiquities leads to assembling the part’s pieces before putting them all together for the amount of gear.

Item Effect: While the player has the Faun’s Lark Cladding equipped and sprints for at least one second, they can run through enemies. Enemies the player runs through are also charmed, preventing them from attacking the player. They are also given 678 Stamina, Magicka, and Health whenever an enemy is charmed.

Item Effect: While this item is equipped, it prevents the player from moving while they are bracing. However, when they are braced, they generate a zone that gives all allies 950 additional Health Recovery and increases their damage mitigation from blocking by 30%.

Skyshards are a valuable resource in Elder Scrolls Online. Every region in the game has a selection of Skyshards spread throughout it, and whenever the player finds three of them, they are given a skill point. Here are the locations of all six Skyshards added by Firesong.

Question: Is the Firesong DLC Free in ESO?

Answer: The Firesong DLC was given to all players participating in a limited-time event called the Heroes of High Isle event. However, it is also included in ESO Plus for any players that subscribe to it.

Question: Where is Firesong set in ESO?

Answer: Firesong is set on the islands of Galen and Y’ffelon. They are both smaller islands in the Systeres Archipelago, near High Isle.

Question: How Much Does Firesong Cost in ESO?

Answer: Firesong is included in an ESO Plus subscription, or it can be purchased with 2,000 Crowns, which are comparable to roughly $20.

The Firesong DLC in ESO has a solid amount of content to offer players, especially if they want to witness the end of the Legacy of the Bretons year-long narrative event. It provides a couple of fun and cinematic World Bosses, an attractive new deck for Tales of Tribute, and some compelling armor sets. All of its content is well worth playing through, especially if you already have an active ESO Plus subscription.